Mobile Gov Experiences are agency stories about creating anytime, anywhere, any device government services and info. This entry is a story shared by AIDS.gov. 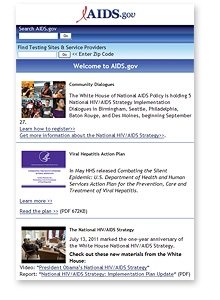 AIDS.gov implemented an innovative model for responsive design by combining the former AIDS.gov and m.aids.gov to a fluid site accessible on computers, smartphones and tablets. View the webinar on AIDs.gov’s responsive design.

Testing showed that more and more people were trying to access the website via mobile device but not all mobile devices were receiving the m.aids.gov site fully. Since a lot of the content made the implementation of responsive design fairly easy, it made sense to combine the websites on a plethora of levels, the two main reasons routing from an easier to manage site (one site vs. two sites), coupled with the need for a more efficient, better designed, mobile site. We had previous experience with responsive design with the Facing AIDS project.

A simple reason for the switch to responsive design can be seen in the increased mobile traffic to AIDS.gov:

The biggest concern was focusing the site around the deliverables of responsive design that users would directly experience such as fluid grids, flexible images and responsive media queries which set up six breaking points for whatever device the user may be using. From there we saw the success and fluidness of the Facing AIDS site and decided to combined the mobile and AIDS.gov site in a responsive design format.

Not really any feedback since launch was only a week prior, but so far testing has proven that the site has been similar to the original goal of the responsive design project.

Testing needs to occur not only in a office and in-house environment, but other places as well. Most of the bugs were found on tablets and smartphones while testing them on the devices they will inevitably be used on. The website may work on the browsers in the office during the beginning stages of testing, however, if it doesn’t work on the actual devices it is not as helpful to mobile users.

Continue to expand the site’s ability to perform on other devices from any screen, browser, or device fathomable. The site is relatively new so receiving more feedback will be a tangible goal in the near future.

You can reach Jeremiah Vanderlan via email.