Helping patients manage chronic pain has become an increasing challenge for health care providers, particularly in the face of an ongoing opioid epidemic in the United States.

In response, the National Center for Complementary and Integrative Health (NCCIH) at the National Institutes of Health (NIH) has made funding research on integrative health approaches to pain management—exploring which approaches can be implemented as part of an overall treatment strategy—a research priority.

An important part of our work focuses on the U.S. military, who have both chronic pain rates and opioid use rates that are much higher than those of the general population. In fact, NCCIH is partnering on pain research initiatives with the U.S. Department of Veterans Affairs, the Department of Defense, and several agencies at NIH.

This blog post looks at how NCCIH used Facebook Live to communicate the importance of this research focus to the public, engage with concerned citizens about the future of pain management treatments, and increase the reach and visibility of this topic.

NCCIH hosts a yearly Integrative Medicine Research Lecture Series that explores the current state of research and practice involving complementary and integrative health approaches. These talks take place on the NIH campus, are free and open to the public, and are live-streamed and archived through a streaming service provided by NIH. This year’s spring lectures focused on the U.S. military, veterans, and their families.

To increase visibility and engagement of these talks, NCCIH implemented a digital strategy by: 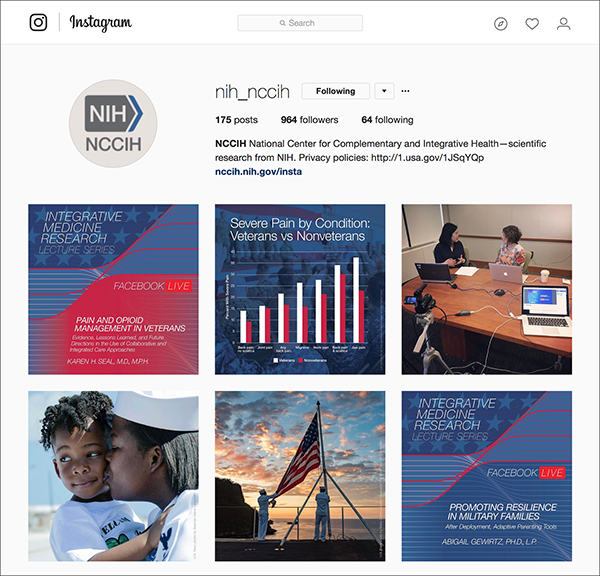 The topics included resilience in military families, pain and opioid management in veterans, and the incorporation of mind and body approaches into military health treatment plans.

What Do We Know?

We can look at the success of this series in two ways:

An Increase in Reach

Each Q&A built momentum on the one that preceded it:

An Increase in Engagement

Why the incremental increase in engagement? A few reasons stand out:

This element of Facebook Live—the element that puts not just the science, but the stories behind the science, into people’s homes or offices—has changed how researchers and subject matter experts reach their audiences.

Individuals who want to attend a lecture or learn more about a health topic but can’t join in person are still given the opportunity to show their emotions, share information, reach out to friends who might be interested, ask questions, and receive responses.

What Did We Learn?

A Facebook Live series on one central topic—in our case on integrative health and the U.S. military—allowed for a larger, more in-depth story arc to be told. That story examined coping mechanisms and parenting techniques for military families, explored approaches to help veterans manage pain and opioids, and allowed for a general discussion on complementary health approaches—like acupuncture, yoga, and meditation—and how they are integrated (or could be integrated) into U.S. military health services.

Each event, on the heels of the one before it, was an opportunity for promotion—an opportunity to provide audiences with a fresh angle to a standing topic—giving the traditional stand-at-a-podium lecture a new and multifaceted life.

[1] It’s unclear why the overall reach of this third Facebook Live Q&A was lower, despite higher engagement metrics. Because Facebook regularly changes their algorithm, it’s possible a change could have taken place that affected those reach numbers.↩