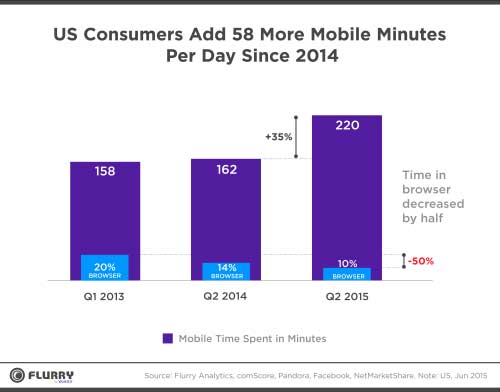 Yahoo’s mobile analytics service, Flurry, released a new and provocative report about mobile apps versus mobile browser usage, in which they found audiences are spending almost an hour more with their mobile phones than last year. They also discussed the importance of how “content is king” in mobile apps.

The top mobile app categories included mobile messaging/social applications, entertainment, and games, which is nothing new; these continue to reign as the most popular among users as repeat research from different sources continues to prove this.

What was unique about this report was that content within those apps was driving the time spent and creating that growth. 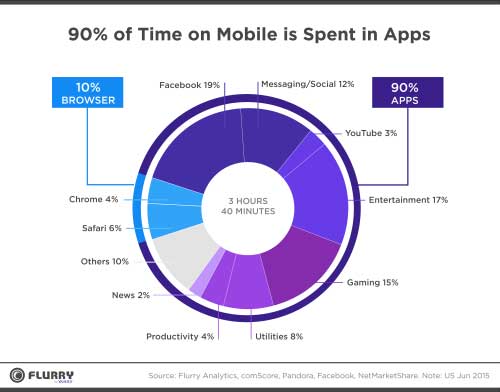 Simon Khalaf, senior vice president of publishing products, explained the cause saying, “Messaging and Social apps grew from 28% of time spent last year or 45 minutes per day, to 31% of time spent, or slightly more than 68 minutes per day this year. This is a 50% year-over-year increase. However, the majority of time spent in messaging and social apps is actually spent consuming media, such as videos on Tumblr and Facebook or stories on Snapchat. A study by Millward Brown Digital showed that 70% of social app users are actually consuming media. While we can’t correlate the 70% directly to time spent, we firmly believe that media consumption, either articles read in the Web view in app, or video consumed in the feeds, constitute the majority of time spent in social apps. This is a big trend and one that will be watched very carefully by traditional media companies. These companies have to adjust to a new world where consumers act as individual distribution channels.” 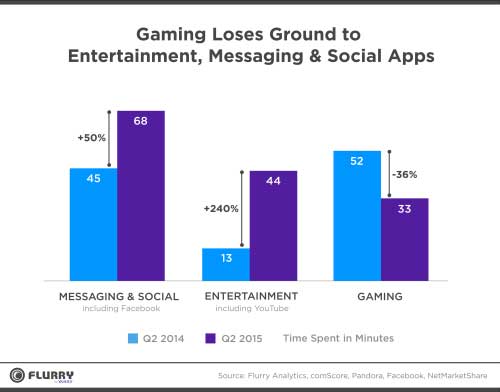 So yes, mobile app usage is up, but within the apps users are often viewing Web content.**** Mobile website content viewed in a social or messaging app like Facebook or Twitter counts towards the mobile app usage time since most apps now serve Web pages within a “webview” still in the app. Over the past year, Facebook has made their app incredibly seamless for serving outside Web content within their application, so much so that you never have to leave the app but can still see things published outside their app on the Web.

So, these numbers can be very deceiving and may make you think about running out and just building everything in apps, but you should keep in mind most of the social and entertainment content is Web content. Also, most government agencies don’t work in the mobile messaging or entertainment business, so making the case for building and supporting a native app can be a tough sale compared to a mobile-optimized website that works in all mobile browsers.

One other key takeaway from this research is to keep in mind how important it is to make sure that you’re testing your website performance within social media webviews, as well as on the mobile and tablet platform browsers. 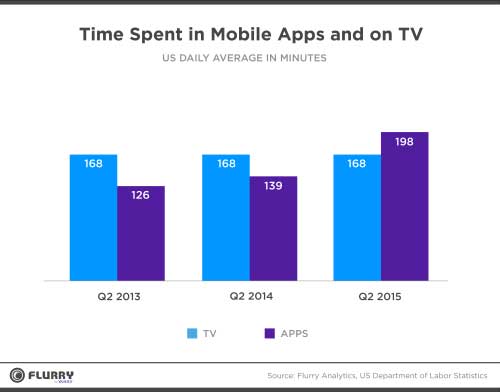 In the blog post Khalaf said, “After putting the desktop Web in their rear view mirror, apps now reign supreme as the top media channel in the United States, even without the help of the mobile browser. For the first time ever, time spent inside mobile applications by the average U.S. consumer has exceeded that of TV.”