DigitalGov has seen posts from members of the community who land on opposite sides regarding social sharing buttons. There are those who find social sharing buttons useful (When Sharing Buttons Work and those who’ve found the opposite (To Use Social Sharing Buttons or Not. I’d argue the utility can be found in adjusting how, or more specifically where, you use them. But first…

Since 2011, the National Institute on Drug Abuse (NIDA) has used a small orange box that says “+Share.” In June 2014, we added a scrolling toolbar (on the left, in the desktop view screenshot below) to the site for those viewing on a desktop. Then in October 2014, we enabled a scrolling toolbar for mobile visitors as well (on the bottom, in the mobile view screenshot below). 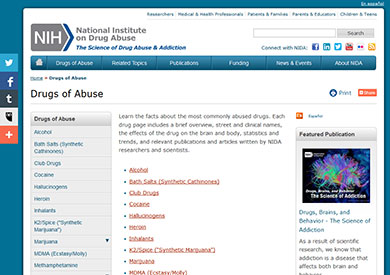 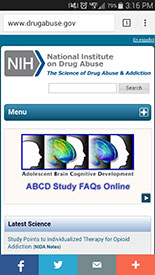 Making these adjustments involved adding pieces of code provided by AddThis to our website. AddThis is the company we use for social sharing services. For the small amount of time and effort spent on the addition of the sharing toolbars, we quickly saw results. Immediately, we experienced a rapid increase in social shares. We averaged 1,000-1,500 shares until June 2014, when the toolbar was added. For the months of January and February 2015, we’ve exceeded 20,000 social shares each month.

More importantly, we’ve also experienced a correlational growth in social referrals to the site since the implementation of the social sharing toolbars. The tool we use only gives social click data for the top 50 shared pages, providing a slightly incomplete picture of clicks back to our site based upon the social shares. However, by analyzing the social click data available, social clicks on the shares have increased from about 1,000 a month to about 2,000 a month since we added the social sharing toolbars. When you consider that our social referral traffic has been averaging 30,000 each month, another 1,000 clicks is noteworthy. 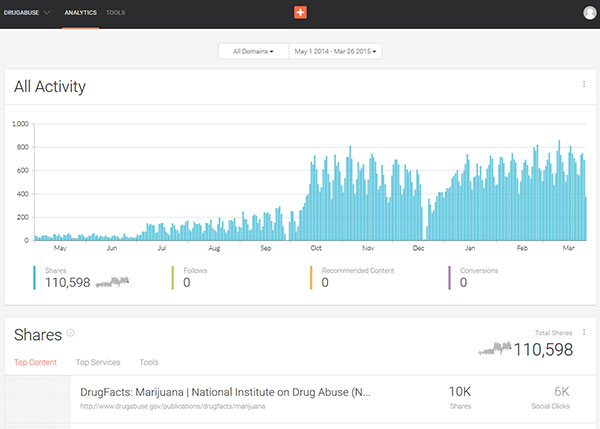 Another lesson learned is that the location of the toolbars played a crucial role in the increase in shares. The toolbars, which scrolled with the visitor, made it obvious and easy to share NIDA’s content. If you feel your social sharing buttons aren’t pulling their weight, consider adjusting their location and design in order to attract visitors to the sharing options on your site.

If even a fraction of your visitors share to their accounts, you should see increased traffic driven back to your site. Once the buttons are up on your site, there is minimal effort required to keep the sharing going. Can you say the same about other social media strategies you employ?

What are your thoughts? Is it worth it?