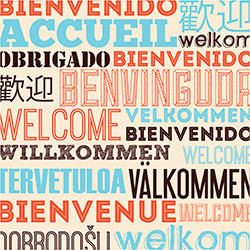 Multilingual does not always mean multiple accounts or websites. Increasingly, multilingual content is delivered in an integrated way, with two (or more!) languages delivered on the same website, app, or social media platform.

The World Digital Library (WDL) is one example of how multiple languages can be incorporated on single platforms. The WDL is a hub for cultural artifacts that includes books, manuscripts, maps, newspapers, journals, photographs, sound recordings, and films. The WDL website is available in seven languages: Arabic, Chinese, English, French, Portuguese, Russian, and Spanish. The WDL Twitter account, @WDLorg, posts tweets in those seven languages, as well.

WDL is a project of the Library of Congress and is supported by the United Nations Educational, Cultural and Scientific Organization (UNESCO) and by libraries, archives, museums, educational institutions, and international organizations from around the world.

Jason Yasner, Operations Manager for WDL, said the project has been very well-received around the world. In 2014, the site had 3.3 million unique visitors, 3.9 million visits, and 25.1 million pageviews. The top 10 countries for unique visitors in 2014 were the United States, Brazil, Spain, Mexico, United Kingdom, Germany, France, China, Argentina, and the Russian Federation. Usage has since expanded significantly following the introduction of a revamped user interface (UI) in November 2014 that offers new features and that is optimized for mobile and tablet access.

Yasner noted that there are several Spanish-speaking countries on the list, and in past years, Spain was the number one country with Brazil and United States vying for number two. The WDL actively reviews their content to better serve their audiences.

“We’d like to have more users from Arabic-speaking countries and are implementing strategies to attain this.” Yasner said. “One is working on better ways to display the content and make it more engaging, e.g., timelines, interactive maps, and themes.”

All navigation tools, metadata, and content descriptions are provided in the seven interface languages. Metadata and descriptions can be listened to with a text-to-voice conversion option that is available for every item in all seven languages, as well. 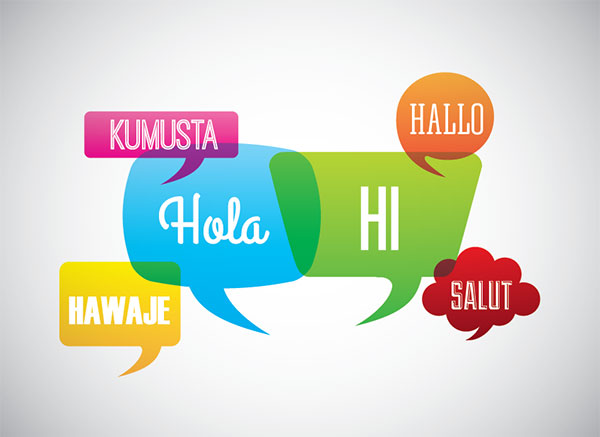 “We receive metadata and descriptions in many different languages, but we use English as our working language.” said Yasner. “Therefore, we have what we call a ‘pre-translation’ phase in the production process where we translate all non-English metadata into English. Depending on the language, some of this ‘pre-translation’ is done in-house at the Library of Congress. After the metadata and descriptions are completed in English, we send them to a partner for review. Once finalized, we send the files to professional translation vendors to be translated into our additional six languages. We then perform multiple quality reviews before the content is published to the production website.”

The same content is available in all seven languages on WDL’s website. Yasner said there are very few exceptions to this rule, and WDL is currently investigating alternate translation methods to fill in the missing pieces.

Content is selected for the website by partner institutions, in accordance with guidelines set by WDL’s Content Selection Committee. Content is chosen for its cultural and historical importance. Books, manuscripts, maps, and other primary materials on the site are not translated but are presented in their original languages. More than 100 languages are represented on WDL, including many lesser known and endangered languages. 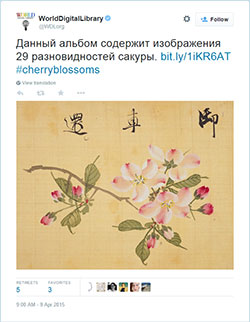 With limited resources, the WDL team decided that they could effectively manage only one Twitter account. After a brief pilot, they went live with English-only tweets and began to translate those tweets into one or more of the other six WDL languages. They then started tweeting in all seven languages as appropriate, always trying to choose specific content linked to a particular event in a specific language or country.

“We have recently scaled back [on Twitter] due to low user interaction,” Yasner said. “We noticed that Russian and Chinese were the least ‘engaged’ languages. Management of the tweets themselves (making the links, character-count checks, making sure two languages weren’t overlapping in content, scheduling, etc.) had an influence as well. We are investigating strategies that we can use to get people more engaged with these tweets. One is going back to tweeting in every language (non-English) once a week, on a designated day, at a designated time. We also ask that the tweet writer suggest at least a time of day when it might be best to tweet (perhaps to coincide with particular time zone, for example). Also, adding a picture to a tweet works wonders, and people are much more likely to retweet.”