The Government of Canada (GC) is retiring the traditional news release format in favour of a more digital-friendly product that makes the key messages of announcements clearer, quick facts more accessible and integrates more effectively with social media channels.

The old style release – which hasn’t changed in over 50 years – disappeared on December 31, 2013. Gone with it are the dense blocks of text that make it hard to read, the use of long titles in headlines and leads and the use of complex jargon. Instead, both the media and stakeholders will get a fresh approach from GC departments and agencies. Two or three paragraphs of short, crisp text will allow them to scan quickly for the key messages of the announcement. The new format also offers quick access to key facts and additional resources. 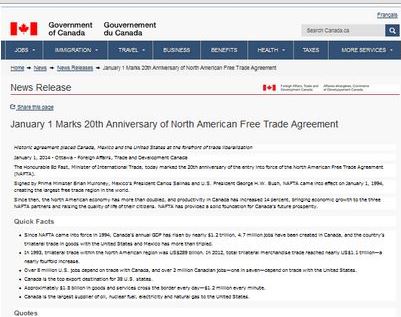 For communicators, the changes mean they can use their creativity to:

An example of the new-look release is here.

All Government of Canada news releases can be found on the brand new Canada.ca site here. In addition, you can find the Communications Community Office on Twitter.

Originally published on the FCN Blog.