Guest post by Mario Damiani, Office of Disability Employment Policy (ODEP) at the Department of Labor. ODEP spearheads the Social Media Accessibility Working Group within the Federal Social Media Community of Practice. The working group recently released a toolkit for agencies to make their content more accessible for citizens with disabilities, including recommendations from agencies across the federal government and collaborators in Australia. 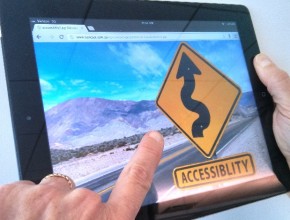 As a representative of the Office of Disability Employment Policy at the Department of Labor, I’ve had the privilege of visiting with numerous individuals and organizations to promote the value of social media accessibility. My major takeaway? There are many misconceptions. By highlighting some of the major myths here, I hope to arm readers with information they can use to educate others and help support social media inclusion for all.

Myth #1. People with disabilities do not use social media tools.

The Truth: Not only do individuals with disabilities use social media tools, they use them for many of the same reasons as everyone else: to stay connected to friends and family; to network and find jobs; to play games; to share links, pictures and videos; to follow their favorite product, brand, celebrity or cause; and many other reasons. This myth seems to be an outgrowth of the erroneous assumption that people with disabilities do not have the same general life experiences (living independently, working, marrying, parenting, attaining educational success—you name it) as those without disabilities. Social media tools have fostered a greater connection among individuals with disabilities, and between those individuals and their peers without disabilities, than has ever existed before. So anyone trying to reach the masses through social media should want a slice of the disability audience.

Myth #2. Social media tools are completely accessible and can be used without limitation by anyone.

The Truth: Unfortunately, the social media tools that are available are not always accessible to all users—particularly those with certain disabilities. And some individuals who want to use social media may not be able to (or may be limited in how they can use it) because certain social media tools are not fully accessible and usable “out of the box,” or because the content disseminated with those tools is not accessible. Case in point: A 2012 survey indicated that just over 1/3 of screen reader users found social media sites to be inaccessible. Imagine what it would be like if you couldn’t decipher a Twitter hashtag, understand the meaning of abbreviations or acronyms used in a Twitter post, appreciate the audio content in a YouTube video, or access a link or a picture in someone’s Facebook post? This is reality for many individuals with certain disabilities, but it doesn’t have to be.

Myth #3. When organizations and entities use social media to push content to their stakeholders, they are reaching everyone they need and want to reach.

The Truth: Information distributed through social media is only as effective as the number of people who view it; and inaccessible social media content excludes a large segment of readers and viewers. Think about it. If a company wants to recruit job candidates via social media, it will only be able to reach those individuals who can receive and interpret the content being shared. And while a company might not know how many potential people with disabilities are included in its target audience, it is clear that if the company does not take accessibility concerns into account, it will not reach everyone. This, of course, could result in missed opportunities to recruit an excellent candidate. Similarly, if a government agency wants to use social media to warn the public about an approaching tornado or an automotive recall or a flu pandemic, it must make sure that everyone can receive the relevant message.

Myth #4. It is expensive and time-consuming to make social media content accessible.

The Truth: Accessibility can be achieved with very little effort or investment. In fact, it’s never been easier to make social media accessible. Often, social media accessibility involves only an openness to and appreciation of new ideas—such as the philosophy of full inclusion or universal access. It may be as simple as taking basic steps to format and supplement the content so that it is usable by everyone. One example is video captioning. Once considered an added, time-consuming expense, captioning online videos is no longer difficult thanks to YouTube and other free captioning services. Such services allow you to add closed captioning to short videos (i.e., 10 minutes or less in length)—a valuable offering considering that the most impactful online videos are three minutes or less. Even more simply, if a company’s social media expert needs to tweet an important piece of information with an image or photo, taking the following steps only takes a few seconds:

Myth #5. Compliance with Section 508 of the Rehabilitation Act of 1973 guarantees social media accessibility and usability for individuals with disabilities.

The Truth: While this statute and its implementing regulations are certainly important, they don’t necessarily capture what it means to have completely accessible—or usable—web content. The Web Content Accessibility Guidelines (WCAG) 2.0 offer a fuller picture of the kinds of things content managers need to do to maximize the reception of their content by others. While WCAG 2.0 is an excellent guide and I would encourage universal adoption of Level AA standards, I would caution against using WCAG alone as a means to achieving accessibility. In my opinion, there is no one set of regulations or guidelines that can guarantee accessibility. All we can do is strive to be as inclusive as possible. We have to change the question from “Have I done everything Section 508 says I should do?” to “Is this content as inclusive as possible to the broadest, most diverse audience?”