“Raising your hand can be a catalyst for everything that happens from that point on,” says Joanne Short. The USPS employee recently shared how she steered her career in a positive and upward direction by taking on increasing responsibilities outside her job description. 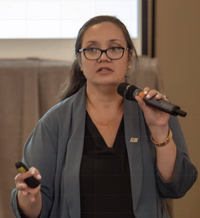 Short first volunteered to help with her agency’s Combined Federal Campaign (CFC) after seeing the difference the campaign had made in her family’s life. At first, she was anxious about talking to her coworkers, but she worked with a mentor who supported her and introduced her to strategic communications. Short continued taking leadership positions within the CFC, eventually managing her agency’s campaign as program officer.

Beyond the CFC, Short took advantage of other opportunities to grow and gain new skills. She worked with her mentor on communications products. She even went on live TV to promote USPS products and services.

“I could have accepted every role I was in and done the minimum,” says Short. “Instead, I chose to expand my role.”

When applying for a new position, Short realized she could springboard on her volunteer experiences. She was able to show how her broad technical and communications skills would benefit the USPS during a time of new challenges.

She got the job.

In her current position, Short plays a key role in strategic communications.

“One of my proudest moments was being called by the manager of communications to fill in as the specialist in one of the largest media markets in the country,” Short shares. “They honestly could have called on anyone, but they called me because, in every other situation, I had made myself available to help at the drop of a hat.”

After learning about an inspiring mail carrier named Oscar Osorio, Short told his story in a national newsletter. She also facilitated his appearance on a nationwide television special honoring essential workers. She now mentors USPS executives on their media appearances—and has taken time to mentor the agency’s current CFC program officer.

Short encourages everyone to take advantage of everyday opportunities to advance, learn, and grow, even those that seem too big or too much of a stretch. “Every day is your opportunity. Every interaction is your interview. When you’re asked to raise your hand, just do it.”

Joanne Short is a federal employee with the United States Postal Service (USPS), where she helps the USPS executive leadership team to inform and engage employees, coach and mentor team members, and improve the employee experience.