Social media for public service is a diverse field that uses platforms and data from both the private and public sectors to improve citizen services, make them easier to access and deliver them more cost effectively. It is not just public affairs or communications, but spreads into customer service, resource development and more. Many of the best examples of social media in government can’t be seen on the surface of a tweet or post, but in how these collaborative, engaging strategies improve the processes of public services themselves. We still want to share with you examples of how these programs shined in 2014, however, and for that we’ll tell the story with color.

We won’t call it “The Best of 2014” because hundreds of examples rise to the top, but here are just some of the advances and trends that made 2014 an exciting year to work in social media in government.

From Space to Sea, 3D Printing and Drones

No compilation of social media in government can start without NASA. NASA hosted 22 NASA Socials, bringing hundreds of people who engage with NASA via social media together for unique in-person experiences of exploration and discovery. The agency’s Twitter, Facebook, Google+, and Instagram accounts are the most followed in the federal government. Success in social media for government is more than volume metrics, however, as we strive to find new and more inclusive ways to connect people with public services. 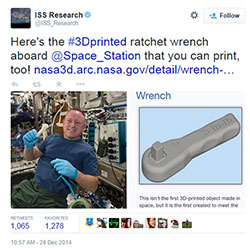 NASA made international headlines recently after “emailing” a ratchet wrench to the International Space Station for an astronaut to 3D print and use for a repair. Shortly after, NASA used social media to share the wrench with their millions of community members. Through a combination of innovative technologies like 3D printing and innovative engagement, NASA demonstrated how easy it is to put the space-age resources literally in the hand of anyone.

From space we move to the expanses of our oceans, where agencies like the National Oceanic and Atmospheric Administration also collect content from new sources to bring science and research to people. For the first time ever, NOAA Fisheries used a hexacopter drone to capture tens of thousands of stunning images which they then shared through social media platforms including Instagram. 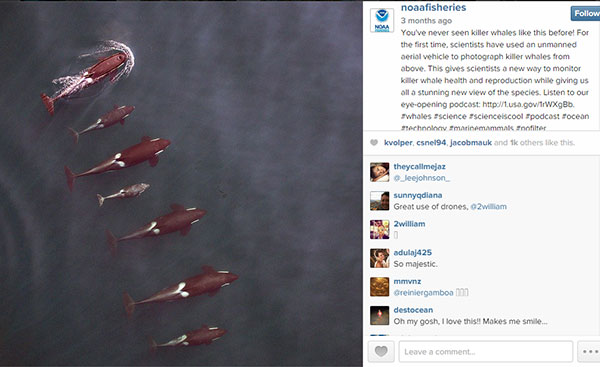 Natural Beauty and Cultural History for All 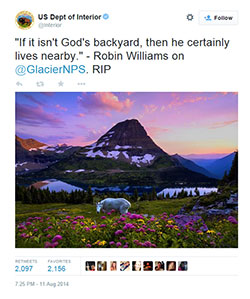 >Agencies continue to use social media to find new ways to social media to connect people with science and technology, but sometimes they want to experience our cultural history or the beauty of our natural resources.

Time Magazine recently recognized “The Department of Interior‘s Most Popular Instagram Photos of 2014″ with vibrant images of our nation’s most beautiful public lands coast to coast.

Interior’s most engaged post in 2014 was a tribute to comedic actor Robin Williams and his appreciation for Glacier National Park.

You can imagine the National Archives and Records Administration has something to share, with more than 10 billion pages of textual records; 12 million maps, charts, and architectural and engineering drawings; 25 million still photographs and graphics; 24 million aerial photographs; 300,000 reels of motion picture film; 400,000 video and sound recordings; and 133 terabytes of electronic data. It doesn’t mean they can’t have some fun sharing our cultural history, however.

Their most engaged Instagram post of 2014 took us back to a holiday season long ago with Mr. T, but don’t think they limit themselves to just sharing images — NARA is a leader in using social media to help crowd source better historical records through their Citizen Archivist Dashboard. This year they opened more than 120 YouTube videos for almost 500 citizen archivists to help caption and tag for better accessibility. 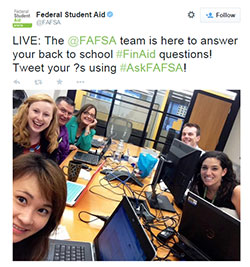 Social media in government isn’t just about experiencing different places and times, it’s about improving where you are now and making it easier for you to access public services (as well as for public services to learn from you). One of the leading examples of how agencies are using social media to improve the customer service of public services comes from The Department of Education’s Federal Student Aid program.

Every month they facilitate an #AskFAFSA forum on Twitter that answers any questions future, current or past students may have about student loans. Rather than call in or wait for an email response, people are able to ask their questions and receive responses in real time, and find out more from other people’s questions. Their process is refined so well they have been able to answer almost 50-150 questions in an hour, and in two languages — a method any agency can learn from to improve their own digital customer service programs.

While prospective students and social media seem like the perfect match, customer service improvements spread to even the most unlikely programs. GSA Auctions allows anyone regardless of location to bid on surplus federal assets ranging from commonplace items such as office equipment and furniture to airplanes and lighthouses, resulting in cost savings for tax payers. Who would think you could bid on surplus lighthouses and tanks, though, am I right? Social media helped GSA Auctions connect with potential customers and improve access to bidding opportunities. These examples and more are found in GSA’s 2014 Year in Review. 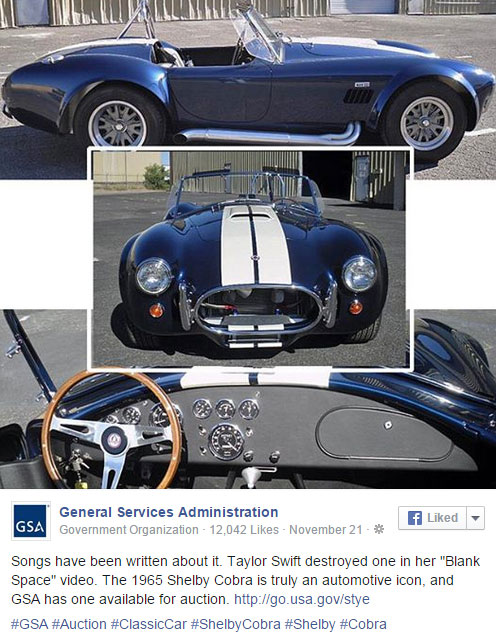 It’s About Giving AND Receiving Too

Social media in public services is a two-way street, and the curation of participation and data is critical to developing better programs. 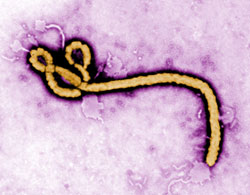 The National Library of Medicine’s mission is to collect, preserve, interpret, and provide access to historical material related to human health and disease, and this year they launched a new initiative to capture and preserve selected “born-digital content” documenting the 2014 Ebola outbreak. Born-digital content includes websites and social media from government and non-government organizations, journalists, healthcare workers, and scientists in the United States and around the world, with an aim to collect and preserve a diversity of perspectives on this unfolding health crisis. 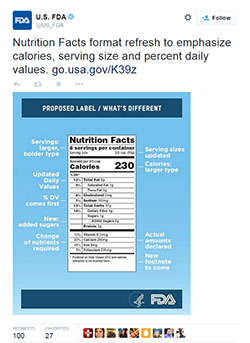 The U.S. Food and Drug Administration also combined social media with traditional outlets like the Federal Register to encourage public comment on the new proposed nutritional facts label. These were the first changes in 20 years for the proposed new nutrition facts labels for food products, and social media helped the agency facilitate a 90-day comment period for citizens to share their ideas and perspectives.

Want to see more of the best from the Department of Health and Human Services? Check out #2014atHHS.

The upcoming U.S. Public Participation Playbook will further help agencies build and evaluate their public participation program, like FDA’s comment period, by combining best practices and performance metrics. The playbook is in development with contributions from 70 federal managers, almost a dozen civil society experts from associations to startups and academia, and citizens.

Yes Use Gifs But with a Purpose (and hard g)

While social media in public service is dedicated to measurably improving citizen services, making them more accessible and inclusive while also reducing costs, it doesn’t mean we can’t be creative when needed. The Peace Corps is a leader in turning user generated content from out in the field, across the globe, to catch eyes for opportunities in their agency and convert them to recruite the best candidates.

This year the Peace Corps worked with Buzzfeed for a colorful feature on “7 Peace Corps Volunteers You’ll Meet (Or Be!) During Service,” which used volunteer-created animated gifs of their work in the field to add a vibrant focus to their mission.

Social Media in Government is No Secret

This is also the year the Central Intelligence Agency joined Twitter with the second most retweeted first post in the history of the platform. 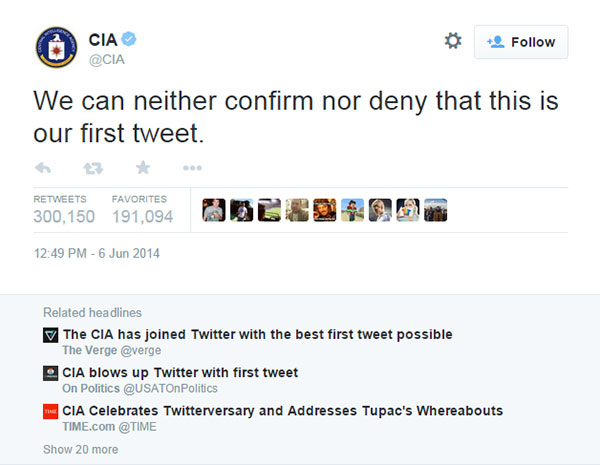 What you may find interesting is that the CIA’s top performing posts are ones with historical significance that share research and information on their mission. For example, their most clicked-through post of the year shared research into the U2 spy plane. Even actor and director Ben Affleck joined in on the discussion when the CIA used social media to educate it’s community about the fact and fiction in the movie Argo.

The Office of the Director of National Intelligence maintained their IC on the Record Tumblr for “direct access to factual information related to the lawful foreign surveillance activities of the U.S. Intelligence Community.” While this may sound overly wonky, their efforts at using social media to improve transparency landed them among Tumblr’s “Big in 2014” notables including Jimmy Fallon and Sesame Street. ODNI published more than 4,500 pages of declassified material on Tumblr, and hosted the Intelligence Community’s first social media Q+A.

The SocialGov Community of more than 800 federal managers working together to advance digital engagement across government has big plans in 2015 for data analysis, emerging technologies, performance management, and public participation. The idea of social media itself will look different than what it did just three years ago, with more seamless integration of public services into any device, the Internet of Things, crowdsourcing, customer service and data for decision-making. 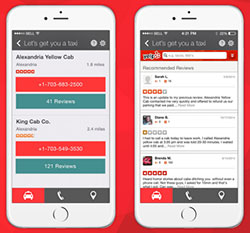 We just worked with Yelp to use their API to infuse user reviews into the National Highway Traffic Safety Administration’s new SaferRide app, aimed at providing rides to holiday celebrants and reduce drunk driving fatalities. Whether we’re using innovative APIs from the private sector or sharing our APIs with them to use for their own services, like when Facebook used our Registry to verify more than 1000 public services pages in a day, in 2015 we’ll see more communities, relationships and partnerships built between citizens, public services and technology innovators.

Do you have an idea? Let us know on the #Socialgov hashtag — we’re listening… and planning.