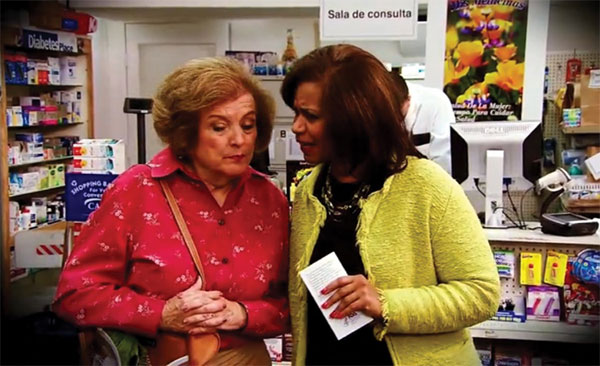 Sonia stands at the pharmacy counter, flashing her most brilliant smile. Jorge, the handsome neighborhood pharmacist, dispenses his own easy smile as they chat. Sound like an ordinary soap opera? This telenovela is actually a tool to help Spanish-speaking women make smart medication decisions.

The four part telenovela series ¡Nunca Más! was developed by the Office of Women’s Health in the Food and Drug Administration. The office works to make all of their materials available in Spanish, and the popularity of telenovelas in the Spanish-speaking community made the project a perfect fit for delivering important health information.

“We wanted to use a tool familiar to the Spanish-speaking community that is used to watching them,” said Alison Lemon, Senior Analyst for Social Media. “It was a fun way to get a serious message across.”

Woven in throughout the videos are several plotlines that correlate with common public health problems: losing track of prescriptions, sharing medication, and not reading label warnings. The Office of Women’s Health worked closely with a cultural adaption company in order to create videos that would be understood by people from diverse Spanish-speaking countries. [youtube=http://www.youtube.com/watch?v=VRzSxHZoUJs&w=600]

The series is available on the ¡Nunca Más! website and on YouTube and has received more than 21,000 views. The videos are also available in other formats. Many of the people who share the video are lay health educators who go into communities and share it in environments with little or no access to technology. Responding to real world needs, the office has distributed DVDs of the series, along with a toolkit in both Spanish and English that contains links to other Spanish language resources and suggestions for hosting ¡Nunca Más! events. The DVDs have been also been distributed to hospitals, where they are shown on closed circuit television with other PSAs.

The video series has led to other multilingual initiatives. The Office of Women’s Health was approached by Text4baby, a public/private partnership that promotes maternal and child health through text messages that are delivered to pregnant women during and after their pregnancies. Messages are available in English or Spanish.

“They approached us because they didn’t have as many Spanish-speaking subscribers, and it was a priority audience because of low birth weight babies in the Spanish-speaking community,” said Lemon. “For the FDA, one of our priorities is to encourage women to sign up for a pregnancy registry. We teamed up on a script that would deliver both messages.”

Lemon said that although English and Spanish are their priority languages, the Office of Women’s Health will create content in other languages based on partnerships with outside organizations. If an organization identifies a need and has a vehicle for distributing content, they will work to translate resources into the requested language.

Ready to create dynamic multilingual content at your own agency?

Be sure to review the multilingual digital content resources that have been developed by the Multilingual Community of Practice, as well as the Sample Video Editorial and Accessiblity Guidelines (Word document, 56 kb, 2 pages, August 2012).