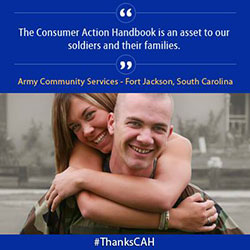 You’ve probably noticed the trend toward more visual content being shared across social platforms—pictures, infographics and how-to videos seem to be popping up everywhere.

We certainly noticed that trend across several government social media properties, so when USA.gov was preparing to launch our campaign introducing the 2014 Consumer Action Handbook (CAH), we wanted to create highly-visual social content to see how it would do in comparison to standard text and link social content.

For this campaign we developed the “Thanks CAH” story. We wanted to share some of the hundreds of letters and emails our office receives from customers who use information in the Consumer Action Handbook to resolve a problem or just make smarter buying decisions. And we wanted to encourage people to share their own stories with us.

In order to make this information highly engaging and visual, we worked with our graphic designer and our one-woman video team to create a series of images and videos highlighting some of the best stories.

Our goal was to test what our audience engaged with the most so we could repeat our successes in future engagement efforts.

We’re about halfway through the campaign now and have some interesting observations that we thought were worth sharing.

1. Visuals for the sake of visuals don’t guarantee more engagement.

Just because you include an image with a tweet or Facebook post doesn’t automatically mean that post will perform better than other posts. The image needs to add value for your audience and resonate with them—whether that means entertaining them, informing them, showing them how to do something or evoking an emotion. Images that add value are more likely to be shared.

We posted fewer videos than images during the campaign, but the videos we did post generally performed better than the campaign images.

I was constantly surprised by how well some of our non-visual content did—sometimes outperforming visual content. The non-visual content that was most successful was always very clearly written and included some interesting fact or helpful resource and a link to more information. Whether it had an image or not, if the content was useful to someone, we found they were more likely to share it.

No matter how much I tried to make sense of why one image or video performed better than another, sometimes I just couldn’t figure it out. Occasionally you get lucky and a post you didn’t think was that special will win the Internet. Other times a post that you think has all the potential in the world, and follows all the best practices will flop. You won’t know what works best with your audience until you try it and measure the results.

What has your experience been with visuals and multimedia?Jessica Milcetich is a Social Media and Digital Strategist on the USA.gov marketing team at the U.S. General Services Administration (GSA). This article is part of this month’s editorial theme on Social Media. Check out more articles related to this theme.