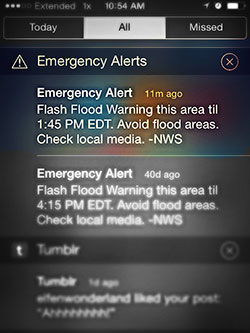 This morning I was walking down 18th Street, crossing Pennsylvania Avenue by the World Bank when I heard what sounded like “a test from the Emergency Broadcast System.” I looked behind me and realized it was coming from my purse and that my phone was jiggling.

I pulled out my phone to see that there was a flash flood warning. I looked up and saw dozens of people on the crowded sidewalks pulling out devices. They all got the same alert. As everyone looked at their phones at once, it looked like a flash mob.

My fellow commuters and I experienced a great example of digital gov at it’s best. Let’s tease out SIX WAYS it worked.

Digital Gov isn’t an idea. It’s the reality that agencies are working on every day, in real life.

What are some of your experiences?