As you read this article, we hope that you come away with a few takeaways: a better understanding of the current terms used in the U.S. for Hispanic and Latino people; why diverse and inclusive representation in government is key to serving the public; and some of the high-profile civic tech products and programs that Hispanic and Latinx federal employees are working on at GSA. Be sure to also check out the We’re Hiring section on open and upcoming positions in TTS.

At the U.S. General Services Administration (GSA), the Technology Transformation Services (TTS) mission is to design and deliver a digital government by, with, and for the public. We are made up of multiple business units, including 18F, Centers of Excellence (CoE), Presidential Innovation Fellows (PIF), TTS Solutions, and U.S. Digital Corps, where we have a shared mission with slightly different team structures and approaches. TTS is based in Washington, DC, but many of us work in home offices across U.S. states and territories. Remote work helps nurture a diverse workforce because it allows us to choose to stay in our communities while doing work that has an impact across the world. It also helps maintain the unique perspectives that are born out of the multitudes of communities in this country.

Part of maintaining a diverse remote workforce is creating an intentional, remote community. TTS has grassroots-led employee resource groups (ERGs) and affinity groups that create space to share things with one another outside of day-to-day project work. For National Hispanic Heritage Month, we want to highlight our TTS Latinx ERG which is a closed, opt-in group for people who identify as Latinx and want an opportunity to connect with others. We meet twice a month and have an internal chat room for general topic discussions. The group’s mission is to “advance and increase the understanding of Latinx identity in government, policy, and technology as an inseparable part of American identity.”

As part of that mission, we created a two-part mini-series educating others on Latinx identity. In our first segment, we shared how we define Latinx, dispelling some common misconceptions, and illustrated the importance of Latinx people in civic tech.

What Is Latinx (Or Is It Hispanic)?

The Office of Management and Budget (OMB) sets guidelines on the categories of ethnicity (“Hispanic or Latino” and “Not Hispanic or Latino”) and race (American Indian or Alaska Native, Asian, Black or African American, Native Hawaiian or Other Pacific Islander, and White). These categories are then used by agencies like the U.S. Census Bureau and Office of Personnel Management (OPM) to collect demographic information on race and ethnicity.

There are challenges with these terms as they are often used interchangeably and incorrectly. Here’s a handy list of definitions:

Latino and Hispanic are U.S.-centric terms. People in Latin American countries don’t usually identify themselves as Latino, but will use their nationality (such as Honduran, Dominican, or Peruvian) in identifying themselves. People who are first- and second-generation Americans might identify as nationality-American (such as Mexican-American). Terms like Nuyorican (a Puerto Rican New Yorker), Chicanx/a/e/o (an American of Mexican descent), and Tejanx/a/e/o (a Texan of Mexican descent, particularly those whose families lived there when the region now known as Texas was still part of Mexico) also try to capture identities that are uniquely “American-born” with a different connection to their family’s country of origin.

An ethnicity is defined as a social group that has a common national or cultural tradition, but it doesn’t necessarily categorize physical attributes. The way we are perceived “racially”—our physical characteristics such as skin tone, hair texture, facial features, etc.—does not always fit with stereotypes of our ethnicity. In fact, people in the Latinx community may also identify with any of the five broad racial categories or with the “Some Other Race” option.

Racial breakdowns of Latinx people are sometimes removed when reporting racial and ethnic demographics. Practices like this can perpetuate the misconception that Latinx is a “race” grouped together by sharing similar physical attributes. It also forces people to choose between their Latinx identity and their “racial category,” both of which are inextricable parts of our lives. Within the Latinx ERG, we’ve struggled to put our identities in a box. By sharing our experiences with one another, we’ve been able to share our knowledge, research, and stories with larger audiences within the government.

In tech, Latinx people are often the least-represented ethnic group, especially when compared to the national population. According to Census.gov, 65.8 million people identify as Hispanic or Latino — 62.6 million in the U.S., with an additional 3.2 million in Puerto Rico.

Publicly available diversity reports from two major private sector tech companies in 2020 showed that in one, “Latinx+” employees (those who are Latinx and one or more races) made up 5.9% of their overall workforce[1], with 4.8% in tech roles specifically. In the other report, “Hispanic/Latinx” employees made up 6.6% of the core business, with 5.3% specifically in tech roles[2].

According to self-reported information in the SF-181 form, in the second quarter of FY (fiscal year) 2022, the total overall percentage of “Hispanic and/or Latinx” staff at TTS was 4.3%. The 2021 Executive Order on Diversity, Equity, Inclusion, and Accessibility in the Federal Workforce mandates that agencies need to measure demographic representation across areas like: hiring, attrition, promotions, and compensation. Self-reporting identity is crucial to monitoring equitable practices within agencies. It is also important that the demographics of the country are represented by the people who are working to keep it running.

The SF-181 Ethnicity and Race Identification Form (PDF, 65 kb, 1 page) is used by federal employees to self-report their ethnicity and race. As the form notes, providing this information is voluntary and has no impact on your employment status, but in the instance of missing information, your employing agency will attempt to identify your race and ethnicity by visual observation.

Check with your agency’s HR department on how to find out if your race and ethnicity information is correct, and if necessary, what’s the best way to update or submit this information.

Why Does Ethnic Diversity Matter in Civic Tech?

The government must be representative of the communities it serves. This is especially important while we work to improve the public’s experience with the government through technology and design.

Inclusive product decisions are made easier with inclusive and diverse teams. It can also minimize the risk of having to redesign or modify products and services after they have launched. Below, we’ve outlined three ways that our Latinx identity in TTS has helped inform processes, services, and products: language, lived experience and thought diversity, and creating inclusive experiences and driving change.

A growing number of the public speaks Spanish. The American Community Survey estimates that 13.2% of the population (approximately 40.5 million people in the 50 states and Washington, DC) speak Spanish at home—this number is even higher when you count Puerto Rico, where 95.6% speak a language other than English at home. To guide products and services, and engage with these very important intersections of experience, we bring perspectives to teams such as:

USAGov en Español (formerly GobiernoUSA.gov) is a great example of a TTS program that is created by, for, and with Spanish speakers. The program’s mission is to make it easier for everyone to find and understand the government services and information they need. They also provide guidance on how to navigate the federal government in Spanish on social media sites at @USAGovespanol on Twitter and Facebook. 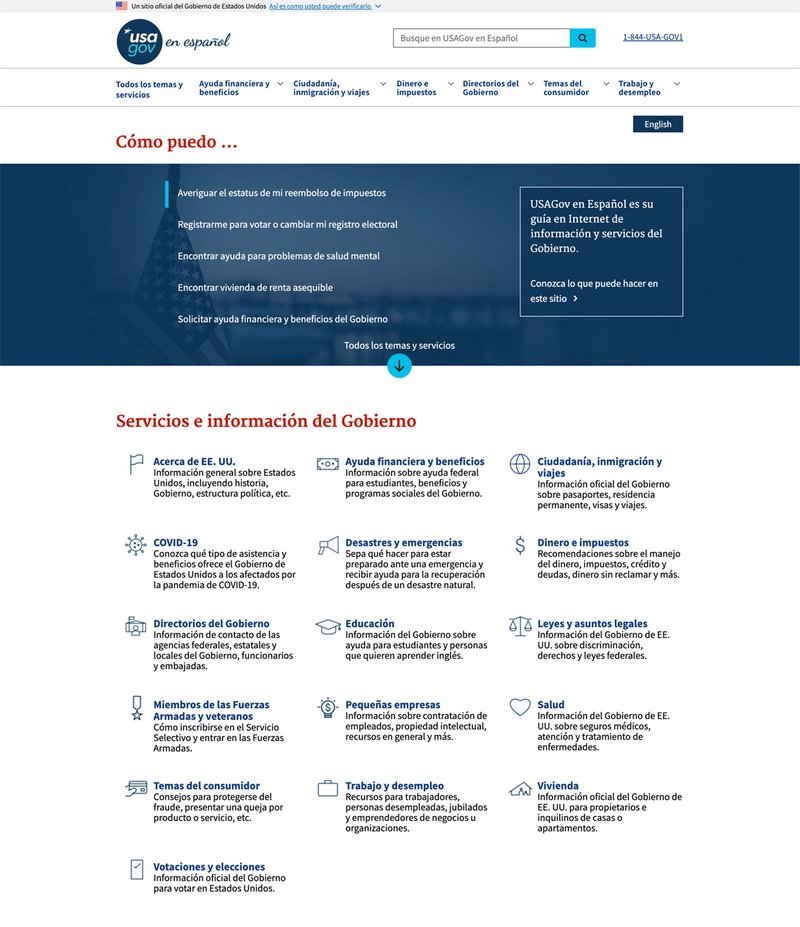 Lived experience is expertise in its own right. When combined with other types of expertise, it can provide valuable insight to a solution that solves a much bigger problem. For example, members of TTS’s Latinx ERG co-authored a 10x proposal called, “Improving government digital service delivery to U.S. territories” from their experience of having Puerto Rico excluded from maps, drop-downs, and other visuals on government websites. The proposal received funding from GSA’s 10x program to pursue further research.

The TTS employee handbook section about Diversity, Equity, Inclusion, and Accessibility (DEIA), originally written by Latinx ERG members, outlines definitions, expectations, and initiatives to improve our workplace culture and foster thought diversity. We all bring unique perspectives—and our identities contain multitudes. Thought diversity, or bringing more than one way to think about something to a team, starts with feeling safe and empowered to do so.

Latinx is an inherently diverse identity. This diversity is invaluable when improving processes, especially for an ever-growing and evolving society. When products and services are built with diverse teams and user needs, we are less likely to redesign them after they are launched. Team diversity can also be represented on public-facing websites. For example, TTS designers can include photographs of people that reflect our nation’s diversity, as seen on the homepages of websites like FindTreatment.gov and civilrights.justice.gov. 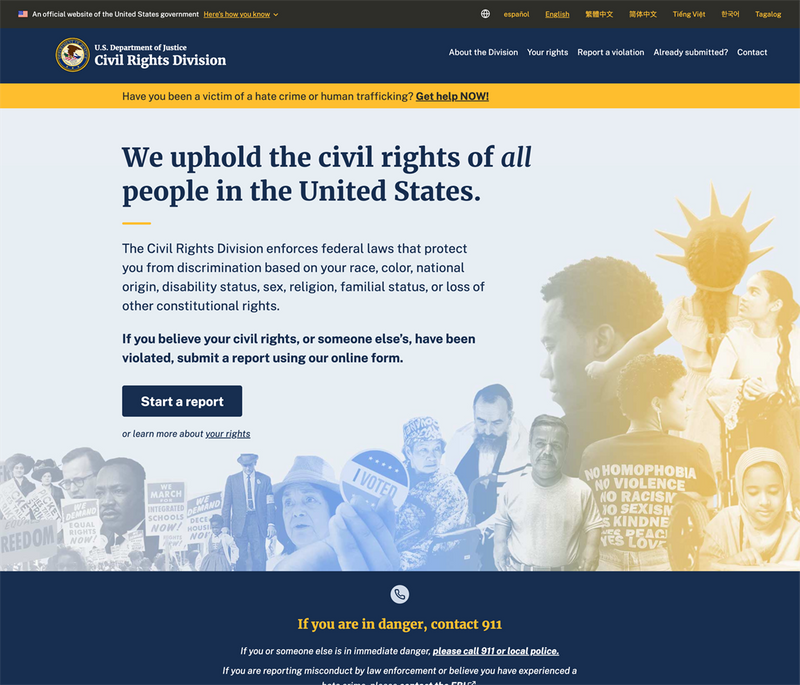 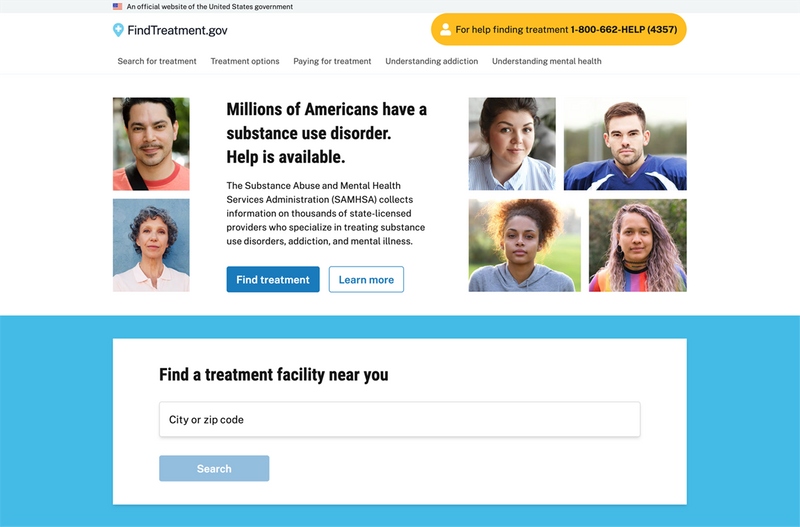 Another example is the USAGov program and websites in TTS' Public Experience Portfolio. Acting Director Leilani Martinez notes, “For many reasons, we start most of our design projects for websites and infographics thinking Spanish-first. Some are related to layout, as written Spanish uses more space. Also, we don’t want to fall into the trap of never thinking about the needs of communities that might not speak English and might not be familiar with the government, its services, or programs.”

Driving cultural change starts with people with different experiences making decisions that impact a broader audience. Communities that have been historically marginalized, by both lawful and unlawful discrimination, are voices we need in government.

We hope more join us in this journey. Currently, TTS is hiring a number of positions for Designers—UX, Service, Content Strategy, and/or Product, and the U.S. Digital Corps will be opening applications in October. We are also opening a role specifically for bilingual (Spanish & English) UX Designers and Content Strategists to help improve services for the Spanish-speaking public.

Check out open positions or register for an info session to ask questions and learn more on the Join TTS page. If you would like to be notified when an application is open, please join our mailing list at: join.tts.gsa.gov/newsletter. ↩