“Smart City” is an emerging term to describe how a community – large or small – uses connected technology and/or other data sets to influence and improve the delivery of services to the private and public sectors. By integrating data and connectivity into their daily operations, communities can automate many functions to create efficiencies and maximize their resources. 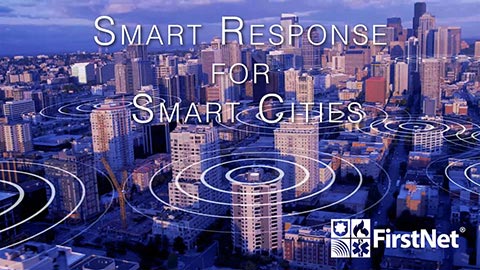 These were just some of the many concepts discussed last week at the Smart Cities Innovation Summit in Austin, Texas, which brought together leaders from over 200 cities and towns to share information about how to best leverage state-of-the-art data solutions for the benefit of their communities.

Public safety was a topic of interest at the Summit because it is about leveraging the sensor networks, human intelligence, and using data and technology tools to create actionable information. In other words, it was a discussion about how the “Internet of Things” is coming to public safety.

I had the opportunity to moderate a panel, titled, ‘First Responders and Use of Mobile Broadband and Applications,’ which featured state and local public safety representatives discussing how Smart Cities can benefit first responder operations:

During the panel, each discussed how their states, cities, and departments are using smart technologies today, as well as their plans over the next several years to continue to evolve with technology. Specific solutions discussed include the Austin Police mobile app that connects with citizens to report a tip or ask questions about services; use of service during large events like a homecoming parade; situational awareness from streaming video during an armed stand-off, tornado touchdown and flooding in Brazos County, Texas and a planned event deployment at the Houston Livestock show and rodeo. In these instances, better communications tools provide better situational awareness to public safety, enabling better and faster response times, all to the benefit of cities and communities.

Panelists also discussed how mobile technologies used by public safety, such as body-worn video cameras, mapping, and computer-aided dispatch, can benefit responders, but can use a tremendous amount of bandwidth that results in first responders sometimes competing with consumers and businesses for network access and capacity. Panelists offered suggestions for how state and local governments can incorporate public safety needs in their Smart Cities-related planning and the benefits of doing so.

Overall, the Summit was an outstanding opportunity to learn more about the benefits of Smart Cities and identify ways that FirstNet can support first responders operating in them.FirstNet developed the following video to highlight ways FirstNet can benefit first responders in cities, towns, and communities that desire to implement “smart” public safety solutions. Thanks to Commander Reyes, Bill Schrier, Phoenix Fire Department Deputy Chief Amos Chalmers, FirstNet Chief Technology Officer Jeff Bratcher, and Associate Director of Cyber-Physical Systems at the National Institute of Science and Technology (NIST) Sokwoo Rhee for lending their expertise and participating in the video.

[youtube=http://www.youtube.com/watch?v=vXv_GfDm3C4&w=600]This post was originally published on the FirstNet blog.