FDA’s “The Real Cost” campaign aims to be edgy, just like its teen audience. Last month, the campaign won the 2016 Shorty Award for the Best Overall Tumblr Presence. 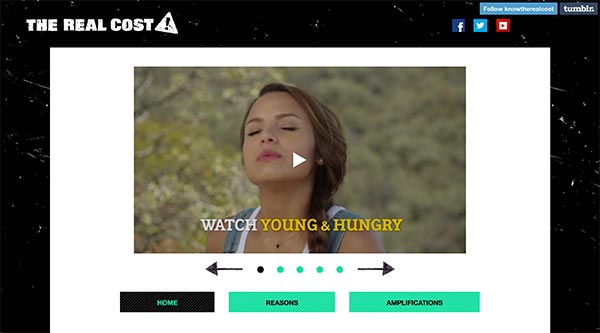 “The Real Cost” educates youth ages 12 to 17 about the harmful effects of tobacco use. The campaign works to prevent teens from picking up cigarettes or trying other tobacco products. The audience isn’t just any teens out there; it’s specifically teens who are open to trying tobacco.

It’s probably safe to say the topic of tobacco and its negative health consequences doesn’t preoccupy the minds of most teens. Relying on them to seek out this information on their own isn’t enough; it’s important to proactively push this information to them, making it as available as possible.

So, our campaign team researches, talks with teens, researches some more and strategizes about how to effectively talk with youth in their native space. And that’s where our social platforms come in.

“The Real Cost” launched in 2014, starting off with the traditional big three social media platforms (Facebook, YouTube and Twitter). About a year in, we launched Tumblr (and later Instagram). And the good news is we learned some amazing things about how teens use Tumblr:

How did we use these findings to the campaign’s advantage on Tumblr? Well, we scoured Tumblr for trending conversations. We looked at how teens depicted smoking on the platform. We studied tag after tag. Eventually, we found streams that put cigarettes in the most positive light. Tags like #SexySmokers, #NailsandCigarettes and #FlowersandCigarettes.

Armed with these discoveries, our approach was influenced by developing content to interrupt the norm. And we didn’t just create it. We used the tags that we previously identified and married our fresh, unexpected content to those streams, leveraging the natural behaviors used by our target audience. Here’s a sampling of what we created and posted:

The Real Cost’s Tumblr engagement rate went up twentyfold. Monthly page views skyrocketed by nearly 100,000 views and the number of engagements nearly doubled. Monthly average engagements with the page went from more than 47, 000 before to more than 90,000 after.

All in all, it’s a strategy we’ll keep mining to stay relevant and topical with teens.Stacey Palosky is the Campaigns Digital Director for FDA’s Center for Tobacco Products.