Customer experience is about making sure needs are met. It’s certainly not a new concept for business; every bookstore has a customer service section. Government agencies are slightly different though. Often people are driven to public services by need or regulation, not choice. Government traditionally didn’t need to court positive attention.

The increasing prominence of digital communication and the ability to shine a light on perceived and real inabilities to meet needs means a renewed emphasis on customer service. Customer service through the digital medium is the customer experience. The Department of Housing and Urban Development’s Switchboard tool represents a means that can be replicated by other agencies to respond to customers.

Switchboard is a simple, public facing message board with a simplified front. People from anywhere can make a recommendation to HUD and it gets voted on. What makes it succeed gets back to the more antiquated idea of customer service, because it’s a flat, people-powered architecture that connects questions with answers.

Here’s how Switchboard functions. Ideas can come from anywhere. Once an idea is submitted, it’s posted and made available for other users of the site to vote upon. Only upvotes (positive endorsements) are accepted. You can try it for yourself.

Users may comment (even anonymously) upon submitted ideas. Moderator comments are placed directly under the idea to share how it’s being received. Once an idea hits 200 upvotes, it’s referred to the Deputy Secretary’s office for review. Ideas can be shared or flagged as inappropriate where necessary.

Categorization, search and feedback are built-in. There’s also a feature which allows users to compare two or more similar proposed ideas again and again until the user is satisfied.

First, the users. Most of the people who populate Switchboard with comments are HUD employees. You may ask yourself, “Why aren’t the users the general public?” This is not as counterintuitive as it seems. Public attention is accepted but not necessarily courted. The outlet of allowing employees to propose fixes and new solutions outside the traditional government structure has real implications for customers. Suggestions are often process improvements, and specific to ways to improve how HUD does business; those wouldn’t necessarily be apparent to customers.

About 80% of the suggestions come from HUD internally, according to HUD’s Jay Austin & Rachel Lewis, who manage Switchboard for HUD.They are stewards of the site and their fingerprints can be found all over Switchboard. While there is no official Chief Customer Officer at their agency, they are visible representatives of a culture that seeks to be responsive to the customer experience.

If an idea gets 200 votes it gets eyeballs from the Deputy Secretary. That’s the top. Even ideas that don’t get the requisite votes are reviewed. All of them. What ends up getting traction with the Switchboard team are the number of votes. That’s a prioritization exercise, but in fact all are reviewed, and the team has backend analytics set-up to assess suggestions.

Not to be underestimated is the relative freedom moderators have to respond to suggestions with speed. There’s no need for a response to be run up the flagpole for approval. Moderators are selected with care. They know, and users understand intuitively, that a fast response to new ideas is the best way to validate a submitted idea and encourage a new one.

The other half of the equation is the behind-the-scenes work to make sure that ideas both above and below the 200-vote threshold make their way to the right parties. Points of contact are in each program office and the moderators disseminate suggestions that are likely to have a local impact. The points of contact and Switchboard administrators collaborate to communicate results back to idea submitters. Feedback is given, whether an idea is implemented or not.

What can a customer experience advocate outside Switchboard take away from the initiative? Here are a few points:

Switchboard does so many things right, because it always keeps things simple and direct for its customers. The real lesson is that it takes dedicated employees from across the agency to put each other in a place to succeed and make positive change.

Below is a screenshot of what Jay and Rachel consider to be a success for HUD Switchboard. A few characteristics should jump out at you right away. 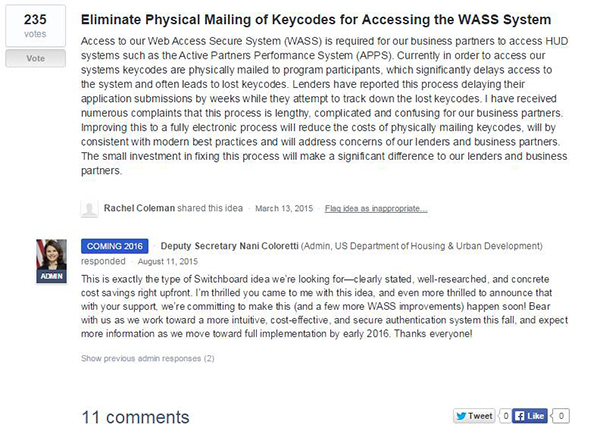