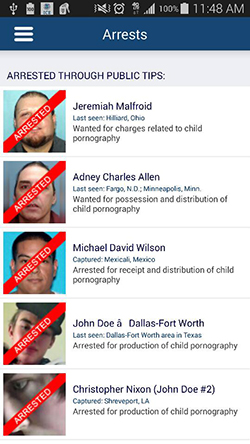 Armed with a smartphone instead of a badge, ordinary Americans are helping law enforcement officers capture child predators.

Since Operation Predator launched for iPhones in September 2013 and Android devices in Oct 2014, the app has assisted in 6 arrests on charges related to child exploitation. Counting tips pouring in from social media, the public assisted in roughly a dozen arrests of fugitive child predators that special agents previously could not locate.

A recent case involved child predator Jeremiah Malfroid, who was wanted in Ohio for sexually abusing a young girl for years. Special agents listed Malfroid on the Operation Predator app in October 2014, and members of the public shared ICE’s request for assistance nearly 200,000 times on Facebook and Twitter. He turned himself in to local authorities in California nearly two months later, and pleaded guilty to charges of child exploitation in April.

HSI Executive Associate Director Peter T. Edge said that “integrating social media into our investigative efforts has been a huge success for us.”

The app complements the agency’s social media outreach by providing the public with an easy way to call-in or submit a tip directly to HSI special agents. The app also lets users share suspect information on social media, helping to make the world a smaller hiding place for these criminals.

When special agents request help from the public, a push notification buzzes the phones of app users with the suspect’s info. Users can submit tips, share the suspect’s mugshot and details on their social media pages, view a list of wanted child predators and learn more about the Operation Predator program.

Operation Predator is available for iOS devices on Apple’s App Store and iTunes, and for Android devices on the Google Play store. Download the app and stay tuned to ICE’s Facebook page and Twitter account to learn more about how ICE combats child exploitation.

You can download this app and other cool mobile government apps with just a few clicks from our USA.gov Federal Mobile Apps Directory. Federal agencies can get their apps in the directory by using the Federal Mobile Products Registry.