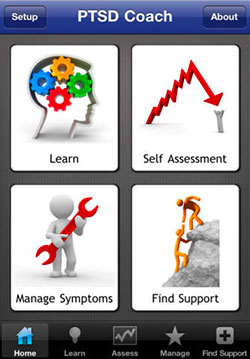 The PTSD Coach mobile app from the Department of Veterans Affairs, provides veterans and users with information about PTSD and professional care, along with self-assessment tools and aid in finding support opportunities. The app has been downloaded over 100,000 times in 74 countries around the world, received numerous accolades and has spawned versions in both Australia and Canada. Designed for users that are both in treatment and not, this application is a poster-child for the benefits of user testing and paper prototyping.

Participants at the Mobile Prototyping Design Workshop in June had a chance to put paper, pens and scissors to use as they worked to replicate the success of PTSD Coach by taking the app’s initial requirements and practicing their paper prototyping skills. Paper prototyping is a low-tech, yet highly effective way of brainstorming in early mobile application development stages.

Once workshop participants learned how to utilize paper versions of what users would see on their homepage, they discovered visualizing “screen” real estate and navigation between them became a less-daunting task. Participants had a chance to test how their paper prototypes performed with the other group of workshop participants who had been prototyping the Department of Labor’s DOL Timesheet app. Here, the participants were able to see how others approached their task and see if the user experience of their ‘own’ application was up to par.

The workshop demonstrates how some pencil and paper can get you closer to a successful app and as PTSD Coach also demonstrates, engaging with your target mobile users whether with paper or digital prototypes is a critical next step.

You can download other mobile government apps with just a few clicks from our USA.gov Apps Gallery.