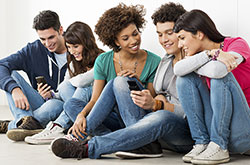 If you’re a frequent Trends on Tuesday reader, you may recall our post titled, “Latinos Embrace the Mobile Future,” which outlined several key categories where Latinos have adopted mobile technology faster than other groups. A new report by Univision and the Interactive Advertising Bureau, took an in-depth look at the mobile habits of Hispanic millennials, revealing that these tech-savvy, young adults not only embrace the mobile future, but may shape what the mobile future will look like.

It’s not surprising that members of the first, mobile-first generation over-index on mobile usage. According to the report, there are 17 million Hispanic millennials in the United States today between the ages of 18-30 years old, and 76 percent of U.S. Hispanic adults, with a mobile device, own a smartphone, compared to 67 percent of the overall population. What’s particularly interesting though is how millennials, especially Hispanic millennials, view mobile as an integral part of daily life. For example, old devices serve as mementos where photographs and memories are stored.

Agencies are creating mobile products for Spanish audiences. USAGov en Español (formerly known as GobiernoUSA.gov) has a the Spanish version of the USA.gov Apps Gallery, Applicaciones móviles, that features Spanish mobile products agencies have implemented. In addition, agencies can get lessons learned on mobile implementation from the Government Multilingual Community of Practice. The best practices and resources developed by the group can help digital gov innovators create successful multilingual and culturally adopted mobile approaches.