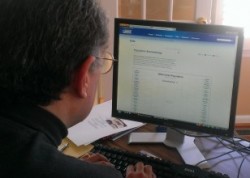 Government agencies are working hard to communicate complex mountains of data clearly and effectively through graphics. The Census Bureau, known for their great work creating visual images, has done just that. They have created a great data visualization game just in time for March Madness! The game, “Population Bracketology” tests your knowledge of state and metropolitan area population estimates.

Start by choosing your geographic level: metro areas or states. Click on the name in each match-up that you think has the larger population. Green shows a correct answer, red indicates an incorrect answer. When you have opposing names picked for the next round, pick again. See how close you can come to a perfect score of 63. When you are finished, play again or mouse-over the results to view the most current population estimates for each pair.

My question is should they have included Spokane in the game? After all they do have the #1 seed team, Gonzaga!

Take a look at the presentation from the Cenus Bureu’s Eric Newburger on the Census Bureau’s Data visualization mission (PPT, 5.14 MB, 22 slides, March 2013) to increase the ratio of graphics to text in publications both online and in print and open their datasets and analyses to a broader public. Also, learn more about creating the Census Bureau’s data visualization of the week (PDF, 3.75 MB, 22 pages, March 2013) from Alex Tait of International Mapping. Learn more about Data Visualization: Images That Tell a Story from the March 2013 training demo:

You can also watch an another training on Data Visualization and Infographics in Government from October 2012: