We are excited to announce our 2019 Presidential Innovation Fellows (PIF) who have begun their “tour of duty” in American tech. These seventeen entrepreneurs, technologists, and designers will help shape the frontiers of innovation in the federal government bringing their agile leadership and vitality to eleven agencies.

“Civic tech service has become an American tradition,” says Joshua Di Frances, executive director of the Presidential Innovation Fellows program. “PIFs have been working alongside federal agencies for the past six years, helping deliver faster and smarter services for the American public.”

In 2018, for instance, PIF Fellows were instrumental in strengthening public-private engagement on a range of national security and criminal issues, as well as helping develop tech sector strategies. They helped agencies prioritize initiatives and execute on projects; they helped create artificial intelligence and machine learning capabilities and cybersecurity strategies; and they were instrumental in the passing of new legislation — the Foreign Investment Risk Review Modernization Act of 2018 (FIRRMA).

Subsequently, PIF Michael Brown was promoted to Director of the Defense Innovation Unit. “My time as a PIF was extremely rewarding since I was able to work on questions of national importance and support the efforts to drive meaningful change,” says Brown.

Clarice Chan, joining from Seattle, Washington, will be working with the Office of Chief Technology Officer at the Department of Veterans Affairs. She is a social impact technologist, and advocate for inclusive design and women’s rights. Clarice has previously worked at Disney, Adobe, NASA, and Microsoft. Working at the intersection of user-centered design and product management, she tackles usability challenges at scale. Clarice has devoted her career to mission-driven organizations, and ultimately strives to bring clarity to complex problems.

Nelson A. Colon Vargas, joining from Puerto Rico, will be working with the Office of Chief Technology Officer at the Department of Veterans Affairs. He is a Mathematician, Data Scientist, and Educator with 10 years of experience in Analytics ranging from academia, to startups, and Fortune 100 companies. Nelson, who has publications in the field of Quantum Topology, was part of Microsoft’s Intellectual Property Products & Solutions team where he was the Data Scientist responsible for developing the Machine Learning portion of their products.

Adam Drake, joining from The Woodlands, Texas, will be working on logistics digital transformation at the United States Marine Corps. Adam is a leader in business transformation across global and multi-cultural environments. Drake founded Atazzo, a technical leadership and scalability consulting company. Adam has provided leadership in a number of industries, including logistics, e-commerce, online travel, online marketing, financial services, healthcare, and oil and gas.

Maria Lynne Dayton, from San Francisco, California, will be working on customer experience at the U.S. General Services Administration and White House Office of Management and Budget. Dayton is a seasoned social entrepreneur and systems designer who has deployed more than 20 development and IT projects globally. As an Impact Fellow at Singularity University, she led several moonshot initiatives with a coalition of Fortune 50 companies and foundations around global health and small business finance. Maria has co-founded a number of companies, including Transterra Media, selected in 2013 by Mashable as one of its Top 25 Startups in Unlikely Places.

Ali Diallo, joining from Boston, Massachusetts, will be working with on a digital data revolution project at the Millennium Challenge Corporation. Ali is a serial entrepreneur, mentor, writer, and strategist focused on mobile technology, media, and social impact. He has more than ten years of experience in advertising technology (adtech), financial technology (fintech), and value-added telecom services (VAS). He is a co-founder and Managing Partner of United Ventures, a global consortium of fintech companies and startup studios operating in the Technology, Media and Telecom sectors. He served as Global Programs Manager of the MIT Legatum Center, MIT’s hub for entrepreneurship in frontier markets. He is a contributor to VentureBeat and has authored books on entrepreneurship, Afrofuturism, and poetry.

Georgeta Dragoiu, joining from Washington, D.C., will be working at the National Institutes of Health with the All of Us Research Program. Dragoiu is an entrepreneur, business strategist, and public relations professional. As the founder of a strategic communications firm in Washington, D.C., Georgeta has served as a key strategist in shaping public debates about such issues as driverless cars, climate change, gender equality, and technology policy. Georgeta graduated from Harvard Kennedy School and the University of Chicago. Her writings have been featured in the Washington Post, The Hill, The Christian Science Monitor, and TribTalk.

Ryan Fiorentino, joining from Los Angeles, California will be working on customer experience transformation at Farmers.gov with the U.S. Department of Agriculture. Fiorentino is a corporate CX innovation leader, most recently, serving as an intraprenurial director at Carnival Corporation & PLC, the world’s largest leisure travel company. He was on the executive leadership team and led experience design for Fathom, a platform and global brand built to re-imagine travel and commercialize world-changing ideas. Carnival’s global family includes 10 cruise line brands serving 12 million travelers each year, across 100+ vessels, and 700 destinations worldwide.

Robert Goldel, joining from Boston, Massachusetts, will be working at the Food and Drug Administration with the INFORMED team toward incubating and regulating artificial intelligence and machine learning algorithms. Robert is a founder, neuroscientist, and data-driven technologist developing innovations with impact in digital biomarkers and software as medicine. At Neumitra, his team launched the first smart watch to measure and manage the physiology of the nervous system with real-time biofeedback and personalized mobile software. His work has been supported by the National Science Foundation, the National Institutes of Health, Breakout Labs at the Thiel Foundation, the Defense Advanced Research Projects Agency, and the founders and innovators of Boston Scientific, General Magic, iRobot, and Yahoo. Robert is passionate about startup ecosystems and where brain health determines cognitive productivity.

Patrick P. Lin, joining from San Francisco / Shanghai, China, will be working at the U.S. Department of Transportation on the Intelligent Transportation Portfolio program. Mr. Lin is an entrepreneur, strategist, and innovative problem solver. Most recently, Patrick led the autonomous driving team for Ford Motor Company in Asia where he pioneered innovative thinking for transportation ecosystems and smart cities (Beijing 2.0). With Ford, Mr. Lin also managed corporate strategy teams and the creation of Ford Smart Mobility in the Asia region. Before joining Ford, Patrick successfully created and led multidisciplinary teams in several industries including travel and tourism, software development, and healthcare.

Adele Luta, joining from Mons, Belgium, will be working at the National Institutes of Health with the All of Us Research Program. Adele is a scientist and instructor with operational experience developing technical solutions as part of a multidisciplinary team functioning in dynamic environments. She supported human spaceflight as a National Aeronautics and Space Administration (NASA) astronaut instructor and flight controller. While overseas, she served as a technical team member with the North Atlantic Treaty Organization (NATO) Science and Technology Organization through the Collaborative Support Office

Soni Meckem, joining from Jackson, Wyoming via Silicon Valley and Louisville, Kentucky, will be working at the National Institutes of Health with the All of Us Research Program. Soni is a customer experience, healthcare, and tech innovator and strategist. Her Silicon Valley positions with Cisco, Intuit, PayPal, and Sun include extensive domestic and international experience in enterprise-wide Customer Experience, Innovation, Operational Excellence, Change Adoption, and Business Operations. She also served as the CIO of Miami-Dade County, the 4th largest court system in the US.

Maura Newell, joining from Austin, Texas, will be working at the Department of Veterans Affairs Veterans Experience Office. Newell is a researcher and designer for social impact who has tackled some of society’s most complex human challenges. In recent years, during her tenure with the City of Austin Innovation Office, Maura’s work has focused on homelessness. She has facilitated the co-design of community solutions such as an award-winning homelessness outreach team. Her work paved the path for Austin’s Bloomberg Philanthropies award of a multi-million dollar grant to support an innovation team on homelessness.

Mike Pritchard, joining from Reston, Virginia, will be joining the U.S. Agency for Global Media, Office of Policy & Research. Pritchard is a tinkerer, developer, executive, and entrepreneur who loves to build things, teams, and companies. Pritchard started his career working in the field of Robotics and Artificial Intelligence for NASA and the DoD. His most recent position as an executive at the digital publishing company Remedy Health Media typifies his experience. At Remedy, Mike rebuilt the technology department, introduced modern business and development processes, and ultimately helped the company through an acquisition.

Rana Saad, joining from Gaithersburg, Maryland, will be working with the Food and Drug Administration on the Digital Health Software Precertification Pilot Program (Pre-Cert Program). Saad is an innovator and digital leader specializing in lean innovation and startups. As CTO and cofounder of a startup, he’s helping AI based disruptive digital products to market in weeks instead of months. In his prior role as the North America Digital Innovation Lead at Accenture, he helped some of the largest corporations and organizations innovate like startups at startup speed.

Sarayu Srinivasan, joining from New York, New York, will be working at the U.S. Department of Commerce, NIST, Technology Partnerships Office. Srinivasan has had a long career in technology as an investor, founder, and operator, helping companies grow and innovate. Prior to serving as a Fellow, Sarayu was the Founder & CEO of KAARGO, a mission driven consumer transport and shipping marketplace. Earlier, Sarayu was a venture capitalist most recently with Intel Capital, investing in high-growth companies across technology sectors in the US and emerging markets.

Nevin Taylor, joining from Washington, D.C., will be working at the U.S. Department of State on the Department’s establishment of a Center for Analytics. Taylor is a strategist and innovator with more than thirty years of leadership in industry, academia, and government. As the Co-Founder of AFWERX, the innovation arm of the United States Air Force, he developed an adaptive planning process to evolve current systems to provide asymmetric future capabilities. Nevin is an esteemed Harvard Cyber Policy scholar, Senior Executive, National International Security Fellow, and Stanford alumnus on Strategic Decisions and Risk Management.

Joy Whitt, joining from Washington, D.C., will be working on improving analytics for veteran’s services at the Department of Veterans Affairs Digital Service (DSVA). Whitt is a developer, data scientist, and civic tech organizer who has worked on open data APIs, data visualization, and analysis projects utilizing real estate, affordable housing, and business development data for both private and public organizations. She runs civic hackathons with various tech inclusion groups including Tech, Rebalanced. In 2015, Joy transitioned from marketing and PR to a career in technology; she learned to code with organizations and individuals committed to teaching coding to diverse and minority communities in the District. 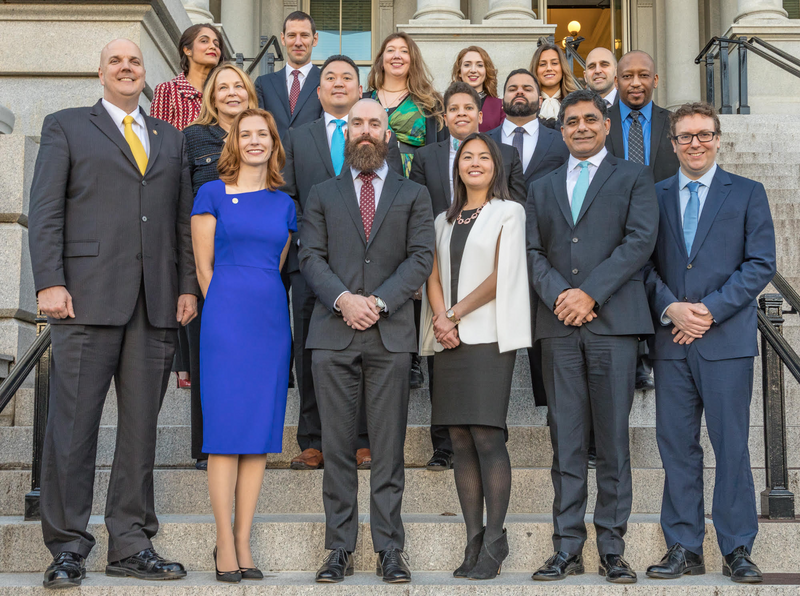 Presidential Innovation Fellows (PIF), are part of our nation’s Technology Transformation Services (TTS) at the U.S. General Services Administration (GSA). TTS' mission is to improve the public’s experience with the government by helping agencies build, buy, and share technology that allows them to better serve the public.

The PIF program was established by the White House Office of Science and Technology Policy (OSTP) in 2012 to attract top innovators into government who are capable of tackling issues at the convergence of technology, policy, and process. The program, which in 2013 established a permanent home and program office within GSA, has recruited 135 Fellows working within 35 agencies. PIFs have worked in tandem with federal agencies to solve critical governance issues including accelerating speed to service, developing new methods of procurement, and encouraging risk-taking in public-private partnerships.