In the next couple of years as new social media platforms emerge and organizations open more accounts, when do you make the decision to shut an account down? When resources are limited, we must analyze the effectiveness of our social media programs and put our time and effort into the accounts that best serve our audiences.

For NIDA, this meant merging our Drug Facts Facebook page into our main NIDA Facebook page, so we could better serve our social media followers and redirect our time into a more effective account. 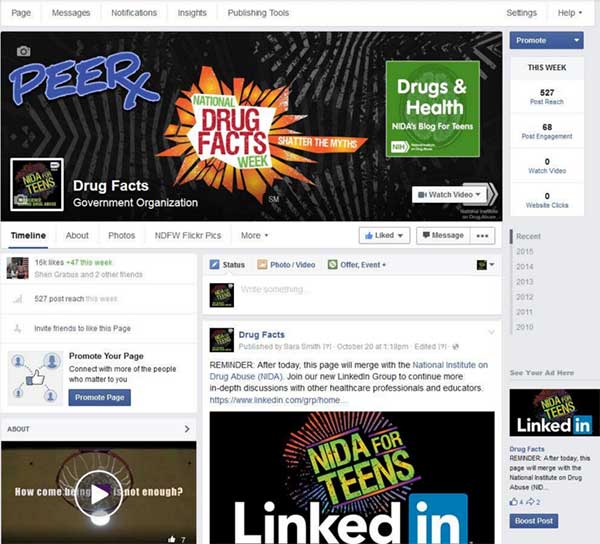 Fast forward to 2015, we took a step back to look at the big-picture goals of our two pages and examine in-depth the performance of our pages and our audiences.

Our NIDA Facebook page’s audience consisted not of mainly researchers, but of members from all spreads of the general public. All NIDA content performed well and teen-oriented materials perform just as well, if not better, on this page than the Drug Facts Facebook page.

Meanwhile, engagement rapidly dropped off on the Drug Facts Facebook page. The audience commented infrequently and never engaged in conversation. The resources required to continue managing the page did not warrant keeping the page running. We began to consider the idea of a Drug and Alcohol Use Prevention Network LinkedIn Group as a better place to foster conversation surrounding NIDA’s teen content. However, we hesitated to open yet another social media account without cutting back. Clearly, we needed to adjust our social media strategy based upon this information.

In order to make the final decision to merge our Facebook pages, we wanted to analyze our audiences and the amount of overlap between the two pages more deeply. To do this, we used Audience Insights within the Facebook Ads manager.

When you are merging two Facebook pages together, you must choose to merge one page into another. The page that is merged will essentially cease to exist and the posts of that page are not integrated into the timeline. However, you will keep your followers and any check-ins from the merged page.

Before we initiated merging our two pages with Facebook, we did as much as we could to archive the page we were merging. We saved the exports from page and post data from Facebook Insights in quarterly chunks to our NIDA share drive.

We created a schedule of posts to make our Drug Facts Facebook page fans aware of the impending merge, which included when the merge was happening and a recommendation to become a member of our LinkedIn group.

Within a day, our pages were merged! We’d be lying if we didn’t say we were a little nervous about how it would come out, but our fans merged (for a total of nearly 75K fans) and there have been no issues on the NIDA Facebook page.

Post-merge, you’ll want to remember to update your website and anywhere else linking to the page going away. You’ll also want to ensure you remove the page from any social media registries.

The process was more involved than we initially thought it to be. The means to archive a Facebook page changed. We believed there was still a button that would allow you to download the page data in one go, however after checking with our Facebook contact, no button exists.