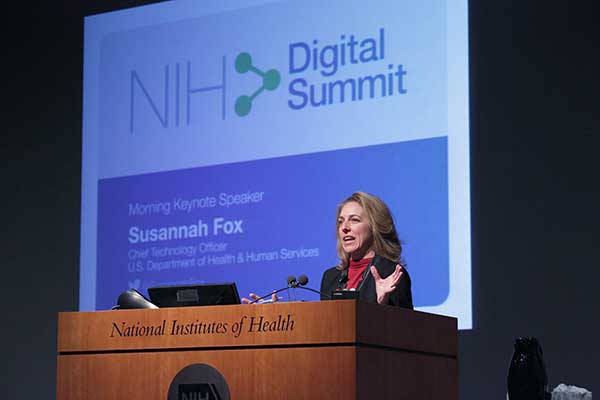 On October 19th, NIH brought together nearly 1,500 digital and health experts in person and via webcast. The event featured two keynote speakers and panels that showcased the unique perspectives of patients and caregivers, health communicators, health professionals and scientists.

Susannah Fox, Chief Technology Officer of the U.S. Department of Health and Human Services (HHS), said we have entered the “third digital era.” First we connected documents, then we connected people. Now in the third era, we can unleash empathy, harness health data and allow everyone access to it, Fox said.

“How might we connect the edges of science to the majority?” – @SusannahFox #nihdigital

Richard Besser, Chief Health and Medical Editor, of ABC News, has learned a few lessons as host of the popular #abcDrBchat. He was surprised by how rude people can be on social media, especially when it comes to scary health issues. He advised to look for the essence of truth in rude questions, and to address the fear with facts.

Rebecca Spencer White used the Internet to find care for her son with a rare disease. She was able to connect with other parents and become an advocate for clinical trials.

Rebecca Spencer White was told “Don’t Google it!” when son was diagnosed with Niemann-Pick. But that’s the first thing she did. #nihdigital

Reaching Patients and the Public Where They Are: Sharing High Quality, Evidence-Based Information With the Public on Social Media, Blogs and Mobile Apps

“MORE” [followers, likes] should be a low priority. Engagement should be first. @eedgerton #NIHDigital

The Health Professional Perspective: Using Social Media To Get and Share Information and Interact With Other Professionals and Patients

Health professionals have created evidence-based tools that can speed response to emergencies and support public health.

Be first. Be right. Be credible. Good advice for gov communicators. #nihdigital #socialgov

Elizabeth Jarrett of the Office of the Assistant Secretary for Preparedness and Response (ASPR) HHS and Stacey Arnesen, of the National Library of Medicine at NIH, collaborated to create resources for emergency preparedness, response and recovery. David Cooper described the National Center for Telehealth & Technology’s tools for behavioral health and stress management in the military. Corey Holland at the U.S. Department of Agriculture supports SuperTracker, a free community to track your food, physical activity, weight and goals.

The Scientist’s Perspective: Using Digital and Social Media To Collaborate, Share Ideas and Communicate Research to the Public

Researchers are using digital tools in broad, creative ways. John Didion, of the National Human Genome Research Institute, advocates for adoption of smart pens to move the lab notebook from paper and pencil into the digital world. Margaret M. Farrell, of the National Cancer Institute, doesn’t limit her idea of colleagues to researchers in her office. She connects with a virtual community of practice that includes more than 2,300 cancer control researchers and practitioners.

Megan Moreno, with Seattle Children’s Research Institute, uses social media as a tool to investigate adolescent health and looks for associations between online and offline behavior.

In case you missed it, you can watch the entire webcast and see the agenda. Check out #NIH Digital to read the tweets.