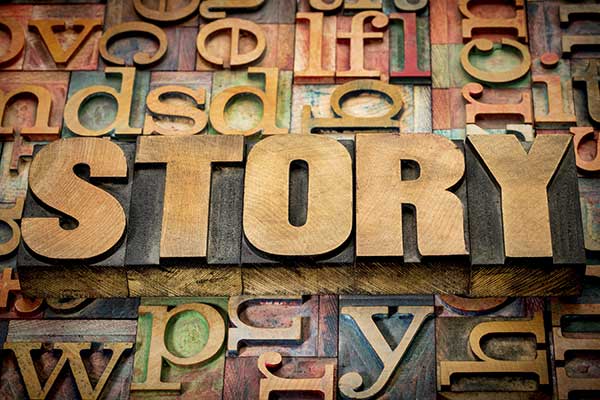 Storytelling plays an important role in helping to establish the human connection that is often lost in today’s digital deluge of information, shares and tweets. A large amount of the content we consume today is derivative, second-hand, and generally passes through us like a breeze. But by using a method of sharing content that is as old as time, we can actually make a connection with our audience and evoke an emotional response.

For certain agencies, it is a critical part of their mission as they work to support and improve the lives of the American people. Do you have important stories to share? Are you having trouble connecting with your audience? Perhaps storytelling can work for you as it has for a number of agencies across government.

Every Pattern Tells a Story

A common reaction to people being encouraged to tell a story is a protest that they aren’t a writer or author. And while that may be true, at least in this context we aren’t looking for a Stephen King or even a Dan Brown; from a content creation standpoint, the most important way to begin telling a story is to follow the pattern that has existed long before the Web. In fact, Swiss Psychiatrist Carl Jung believed that we were born with a subconscious understanding of the basic archetypes of storytelling such as hero, quest or mentor. 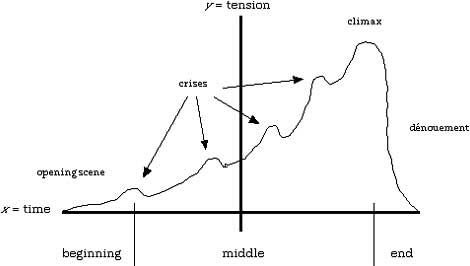 As the chart above demonstrates (and as most of us learned in middle school English class), each story has a beginning, middle, and end, which commonly features a protagonist (or our hero) moving towards a conflict until that conflict is resolved and the story ends. From ancient myths to Star Wars, the “hero’s journey” is a common structure in storytelling and should serve as your guide (or Obi-Wan Kenobi) as you plan your content.

An Example of the Hero’s Journey

Before you start yelling at your screen that you aren’t writing about Luke Skywalker, it doesn’t take the challenge of destroying a Death Star for you to create a compelling story for your agency. The U.S. Department of Labor does a great job of personalizing the impact their various services have on the lives of ordinary Americans. Let’s take a brief story from their Find Your Path section and see how it maps to the storytelling pattern.

The story of Deric Richardson (reading the story before continuing may be helpful) from the Labor blog serves as a good example of how a real-life person and their interaction with a service your agency provides can perfectly align with the hero’s journey. I’ll use the familiar example of the original Star Wars and show how Deric’s story and Luke Skywalker’s story follow a similar pattern. 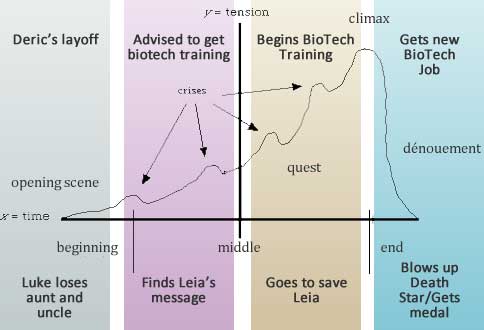 Deric’s story begins with the loss of his job (the initial crisis) and the tension that this creates leaves Deric looking for answers and seeking guidance and assistance, just as the loss of Luke’s aunt and uncle on Dagobah (the initial crisis) sent Luke looking for answers and guidance. All stories need a certain amount of introduction of the main character to help the audience get to know the character and hopefully invest themselves in the character’s journey that is yet to begin.

With Obi-Wan Kenobi serving as guide and mentor and the accidental message retrieved from R2-D2 becoming the impetus for a quest, Luke leaves his home to find the mysterious princess in hopes of adventure and fulfillment. In our Labor story, the American Job Center network suggestion that Deric investigate tuition-free laboratory skills and training plays the role of the mysterious but exciting message from Princess Leia, and the BioTechnical Institute of Maryland serves as part Obi-Wan and, probably, part Han Solo and Millennium Falcon. The BioTechnical Institute serves as the mentor that helps guide the hero along his quest to gain knowledge that will allow him to achieve his goal of a new and exciting job.

For anyone who has taken on the challenge of learning a completely new skill and taking the intensive training described in the post, we can easily envision additional crises that Deric may have encountered along his path. The pressure of coursework could have at some point could have felt as if he was stuck in a trash compactor. We can assume that stormtroopers and light sabers were not involved.

The typical hero’s journey story culminates with a happy ending and our hero successfully completing his quest. In our Star Wars analogy, Luke destroys the Death Star, avenging Leia’s home planet, and is given a medal by the princess. For Deric, he started receiving job offers before he completed his quest (similar to Luke going from nerfherder to X-wing pilot), and his quest was completed by obtaining a new job in BioTech. Cue bombastic march theme, hopefully something composed by John Williams.

Hopefully, this example has helped show you far more than my minor interest in Star Wars (I’m more of a Trek person, honest!) and has illustrated how many of the people who use your agency’s programs follow a very similar journey. But storytelling is much more than following a pattern, as Jung and others mention: the crises and conflicts and climaxes resonate with us on an emotional level because we have the ability to relate to the hero in the story.

For most of us, there is some aspect of Luke or Deric’s journey that we have experienced either directly or via a loved one (Star Wars’ popularity isn’t just due to special effects). Sharing stories, whether it is Deric’s story and the stories of many others via the Labor blog or the White House’s Faces of Health Care section, helps people more directly see the impact a government service could have on their own lives. Customer stories form a portion of the larger story that you should be telling about your agency as a whole.