Consumers are buying less tablets and more phablets, especially in the U.S.

Three recent research reports released in the past week from IDC, Flurry and Kantar each point to a shift in consumer purchasing habits over the past quarter, showing that consumers are reducing the number of tablet devices purchased with an increase in “phablet” or large 5-inch sized phones increasing.

“Phablets claimed 21% of all U.S. smartphone sales in Q1 2015 – nearly quadrupling their 6% share from the first quarter of 2014,” Katar WorldPanel’s report cites. “Apple iPhone 6 Plus took 44% of this segment. Screen size was cited as the main reason for buying a particular phone by both iOS and Android buyers at 43% and 47%, respectively.”

Flurry, a mobile analytics company owned by Yahoo!, was shocked by the results. On their mobile insights blog they wrote, “The growth in phablets from only a year ago is staggering: In January 2014, phablets accounted for only 6 percent of the used devices. In March 2015, the phablet share more than tripled to 20 percent! This growth has come mostly at the expense of medium-sized phones, which lost 9 percent share in the past year. Full-size tablets and small phones also suffered losses in share while small tablets held their ground at 7 percent.”

This phablet consumer trend exploded in Asia over the past couple years and has slowly made it’s way over to the U.S. with the tipping point coming this past year’s release of the Apple iPhone 6 Plus. For many years, Apple resisted large phones (Steve Jobs famously and frequently criticized big phones) and Android built a strong base of users who wanted the larger devices: 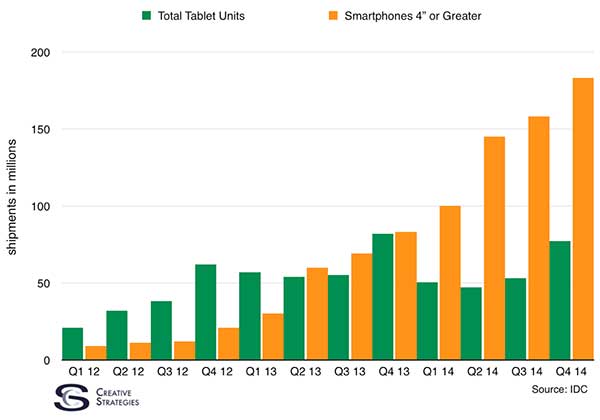 While phablet purchases have been growing, IDC’s report says that tablet growth continues to shrink, impacted by phablets eating their share of the market:

“The market slowdown that we witnessed last quarter is continuing to impact the tablet segment, but we see some growth areas that are starting to materialize,” said Jean Philippe Bouchard, a research expert on tablets at International Data Corporation. “Cellular-enabled tablets are outgrowing the rest of the market, providing an additional revenue stream for OEMs and mobile operators. In addition to driving higher usage than Wi-Fi-only tablets, cellular-enabled tablets also help position the segment as true mobile solutions rather than stay-at-home devices.”

For government agencies, this continues to echo the drum beat that we need to move swiftly to mobile-friendly sites that offer flexible designs from small phones to all sizes of tablets and phablets to serve our constituents. If you’re preparing to move your digital properties to be mobile-friendly, check out these resources.**