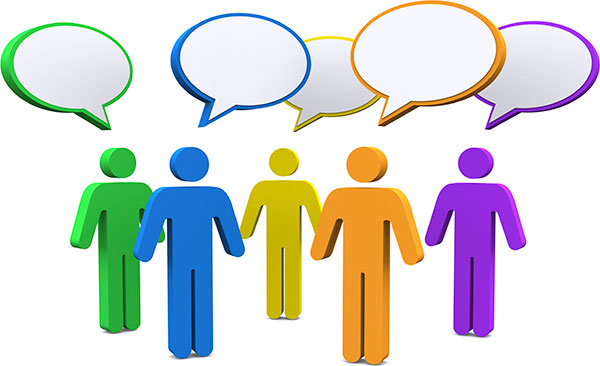 There have been both benefits and challenges presented with each of these digital shifts. More public sector websites provided the benefit of more relevant and timely information being available compared to going to a library—yet this digital shift also presented the challenge of keeping the public service information on these websites organized and relevant. An increase in the use of social media platforms by public sector organizations provided the benefit of rapid sharing of important information with the public—yet most organizations doing such sharing often opted for a one-way “broadcast” vs. interactive conversations.

An important question worth asking is: how can all of us increase the benefits of using social media to improve public service and mitigate potential downsides?

While on an Eisenhower Fellowship to Australia and Taiwan, David had the opportunity to meet with industry and government leaders involved with both the Internet and the Internet of Everything (IoE). Leaders from both nations raised concerns about whether the Internet was becoming an “echo chamber” for reinforcing extreme views, instead of possibly seeking healthy discussions and middle ground solutions?

Scientific research has shown for each of us as humans, once we have a set view in our minds, we all are more likely to interpret data and narratives to reaffirm our set view and dismiss data and narratives that challenge our set view. This means that for all of us it is very hard to change our minds once our minds are set. With the accelerating global adoption of the Internet, several leaders in Taiwan and Australia wondered whether social media might discourage discussion of compromises across different ideologies?

While David had no easy answers for the leaders in Taiwan and Australia, he did note that both “experiments” and “expertise” share the same root “exper,” meaning out of danger. Our rapidly changing world will require us to adapt, think differently, and try new ideas—new experiments—to cultivate expertise in how to best adapt to accelerating technology changes and globalizations.

One example of using person-to-person conversations via a social media platform to inform public service initiatives that Corina recommends involves scanning replies to an agency’s Twitter feed to identify concerns of different members of the public. Such a scan of social media can provide initial insights into what the public cares about regarding that agency. That said, there also is a risk of people creating Twitter bots to “spam” concerns artificially or for choosing to employ social media to exacerbate existing polarized views. Such social engineering tactics may threaten the credibility of online engagement; however, the benefits can outweigh such risks with a good social media strategy. Such benefits of social media use include being able to engage interactively with the public online, which is crucial to having a transparent and open government.

Corina has found the benefits of social media use for public initiatives to include opportunities for everyone to scan and assess what the public cares about regarding an agency. In the case of valid concerns, social media also provides opportunities for members of a public agency to build a relationship with different stakeholders willing to engage in and amplify honest discussions.

True engagement in a social media space involves a dialogue between official organizations and the public. Rather than use “broadcast” mode to send information out into the vast space of social media platforms, leaders can do well to have a dialogue in real time. Public initiatives using social media to engage the public can do so at a scale that is either national or international. Such engagements can result in valuable interaction—to include learning from members of the public who also engage social media—as well as the opportunity to be the source of official information.

While overseas, David met with a group in Australia working to bring jury-based processes to representative arbitration and collective decision-making. The group’s premise centered on the idea that trusted outcomes can be achieved when a diverse and representative group of citizens, randomly selected, deliberate together. Such an approach was interesting as it took something familiar to most of us in democracies, namely the jury process, and extended it to the process of making representative policy decisions when adversarial political differences previously had resulted in ideological fragmentation. Might a future approach to increasing the benefits of using social media to improve public service find some way to incorporate such representative arbitration and collective decision-making?

Looking Towards the Future

Social media has changed global cultures and the way industries do business, allowing rapid sharing of important information with the public in a timely fashion. While it may also be easy to spoof accounts—for example, the existence of several “Fake Steve Jobs” Twitter accounts among others—or to create Twitter bots to artificially “spam” concerns, such concerns should not dissuade agencies from using social media. Both now and in the future, open government initiatives will require interaction with the public, to include in-person interactions, over the telephone interactions, and online via the Internet. That said, such concerns do raise questions about whether certain future social media platforms will prove themselves to be better at hosting constructive, interactive engagements with the public.

Will there be social media platforms that can encourage useful disagreement, consensus building, and brainstorming with real, actual people vs. divisive polarization? Can we experiment and design tools to encourage reflection on viewpoints beyond our own in an attempt to reach shared understanding across a diversity of perspectives?

Looking to the future, we welcome ideas, thoughts, and possible answers for these questions in the comment fields below.

The authors are on Twitter: David Bray (@FCC_CIO) and Corina DuBois (@CorinaDuBois). Authors’ Note: These views are of personal nature and do not necessarily reflect those of previous or current affiliations of the authors. Any examples cited here are for the purposes of highlighting the different social media platforms with no endorsement implied. This post was originally published on LinkedIn Pulse. The post was written in a personal capacity by the authors, Corina DuBois, Chief of New Media for the U.S. Department of State’s Bureau of Consular Affairs, and David A. Bray, Chief Information Officer for the Federal Communications Commission, and does not reflect the views or endorsement of any government entities.