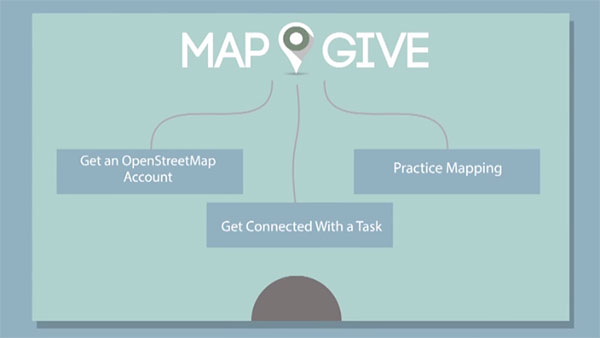 Fighting malaria in Botswana with a group of high school students in D.C. Contributing to the Ebola response from the West Bank. These scenarios may not fit the typical image of humanitarian aid efforts, but technology has transformed the possibilities for public participation in international development. Crowdsourced mapping projects have become key contributors in relief efforts and highlight the collaborative work that can be done between government, non-profit organizations, and the public.

Through crowdsourcing, the MapGive project provides open map data that can be used by individuals and organizations around the world. Volunteers use satellite imagery to map everything from roads to buildings to rivers—no prior mapping experience required. The maps can be used for a broad range of purposes. Mapping neighborhoods in Kenya has helped residents in impoverished areas gain recognition and access to resources. Mapping efforts for Typhoon Haiyan began before the typhoon had even made landfall, and a total of 4.5 million map edits were made, helping relief workers with everything from assessing infrastructure damage to planning medical supply routes.

MapGive is an initiative from the Department of State’s Humanitarian Information Unit (HIU) and is a collaborative effort from both inside and outside the federal space, including the Humanitarian OpenStreetMap Team.

“There are lots of different agencies involved in MapGive, and I think it’s interesting to see the ad hoc and more formal collaborations which are based on the idea of an open community,” said Mikel Maron, Presidential Innovation Fellow in HIU. “It gets people involved in the social-technical communities. It holds a lot of promise for scaling the barriers between agencies and unlocking new types of cooperative work.”

The collaborative nature of MapGive has led to unique events: the American Consulate General in Jerusalem recently supported a youth engagement event in the West Bank that helped map areas affected by Ebola. Benson Wilder, Analyst and Geographer in HIU, said that working with other government agencies will help raise public awareness about the importance of open mapping and its diverse applications, whether it is for humanitarian, health, or civil society efforts. 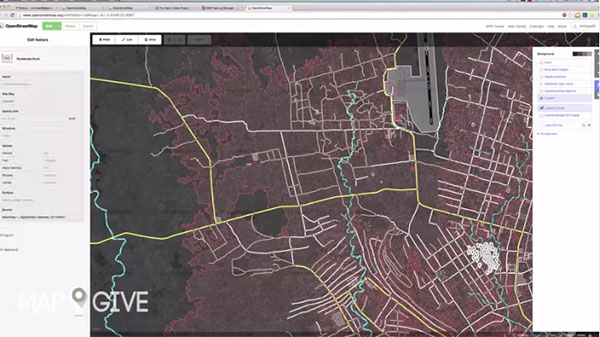 “Being in the Office of the Geographer, MapGive is an extension of what we’ve always done: educating our own colleagues in government about the importance of geographic data,” Wilder said. “This is one subset, and we can use this to create exposure and understanding of all types of geographic data. You can make sense of the world by thinking spatially and geographically.”

Peace Corps is one of the agencies that has gotten involved with MapGive. A Peace Corps volunteer serving in Botswana asked family and friends at home to help her combat malaria through mapping her local community. One of the best techniques for controlling the disease is to spray down the walls of buildings with insecticide, which kills infectious mosquitoes. In order to eliminate malaria from a community, 90% of all buildings must be treated.

“In many places, you have no idea how many buildings there are,” said Matthew McAllister, Special Assistant in the Office of Innovation at Peace Corps. “A lot of these communities are not mapped at all; if you look at a map website, you will see major highways which are actually cutting through entire communities, but the communities are missing and no side streets or buildings are visible.”

With the assistance of volunteer mappers from all over the world, the 10 communities near the volunteer have all been mapped. A project that would have taken years to be done by hand was completed in under two months. In order to help draw attention and volunteers to mapping efforts, Peace Corps has hosted a series of “Mappy Hour” events, where the public can work on active mapping projects. A group of high school students joined their last event in November. However, crowdsourced mapping is truly an international effort. McAllister says the majority of work on the Botswana project was done by people outside the United States, who are not directly affiliated with Peace Corps.

The MapGive project is also looking to scale the crowdsourced mapping movement and recruit more volunteers. Wilder said the number of volunteers is their biggest limiting factor, and they are looking to connect with embassies and U.S. Agency for International Development (USAID) missions around the world to educate people about mapping. They are also creating a curriculum to teach others how to develop and implement mapping events.