Catching child predators? There’s an app for that, and it’s expanding its reach to Android smartphones. 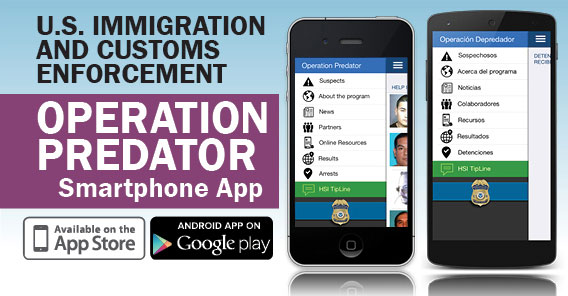 U.S. Immigration and Customs Enforcement’s (ICE) Homeland Security Investigations (HSI) launched the initial Operation Predator for Apple products in September 2013. Within 36 hours of its launch, the app helped HSI special agents apprehend a suspect. The latest versions of the app are expected to significantly increase public outreach to help locate child predators and rescue their victims.

The Spanish language versions of the app are built-in to the iOS and Android applications and require no additional downloads.

The app also provides additional resources about HSI and its global partners in the fight against child exploitation.

The iOS version of the app can be downloaded from Apple’s App Store and iTunes; the Android version is available on the Google Play store.

You can download this and other cool mobile government apps with just a few clicks from our USA.gov Federal Mobile Apps Directory. Federal agencies can get their apps in the directory by using the Federal Mobile Product Registry.