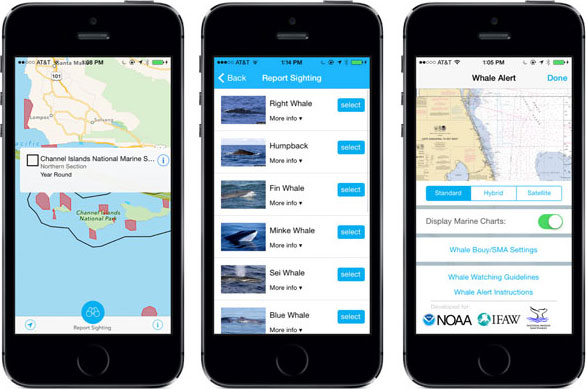 Saving the whales just got easier for West Coasters with the latest version of the popular Whale Alert app.

This free “feel-good” iPhone/iPad app, developed by NOAA’s Office of National Marine Sanctuaries and a long list of partners, now enables users on both U.S. coasts to submit reports of whale sightings in real-time that could ultimately alert boaters and vessel captains to slow down and avoid colliding with these majestic creatures.

Whale Alert uses tools including GPS and NOAA nautical charts to provide mariners with a single source of information about whale locations and conservation measures that are active in their immediate vicinity. The updated app offers users the ability to report whale sightings to databases that NOAA and whale biologists use to map whale habitats and migration patterns, as well as information about California Marine Protected Areas and tide and weather data (see this helpful West Coast Whale Alert site).

More good news: I’m told that an Android version of the app could be released sometime in late 2015.

Wha-ale, what are you waiting for? Download this and other cool mobile government apps with just a few clicks from our USA.gov Apps Gallery.