On this Earth Day, federal social media managers are hard at work, sharing and promoting what government and citizens can do to protect the environment. We’ve compiled a sample of the activities that also show how different agencies are using different social media tools in support of a common goal.

The United States Environmental Protection Agency (EPA) has been leading the way all month, hosting Twitter chats every Tuesday at 2pm EDT, with the hashtag #ActOnClimate. To help people take person action on climate change, EPA’s also sharing a daily tip on social media (Facebook, Twitter, Google+, Flickr, Instagram, Pinterest, and their blog) and on a Web page, according to Jessica Orquina, EPA’s social media lead.”

“Our program colleagues worked with our public affairs folks to develop the tips. Then our multimedia shop turned them into shareable graphics, sized so they’d work well in Twitter and Facebook,” Jeffrey Levy, Director of Web Communications at EPA, says. “Then my team (Web/social media) developed mechanisms to share them. We all talked throughout so the end product would work for the mechanisms we intended (e.g., we provided image dimensions to the multimedia folks).”

Today, EPA has a splash page up replacing its home page for the day. It features the 12 tips that were shared, retweeted, etc. the most through April, rotating every hour through the day. EPA’s also using the splash page to launch a new widget that provides all the tips, changing daily. It allows anyone to share the tips on a Web page or blog.

To provide a coordinated look for Earth Day across EPA’s home page and social media, EPA is using the same image on the main and Spanish Twitter, FB, and Google+ pages: 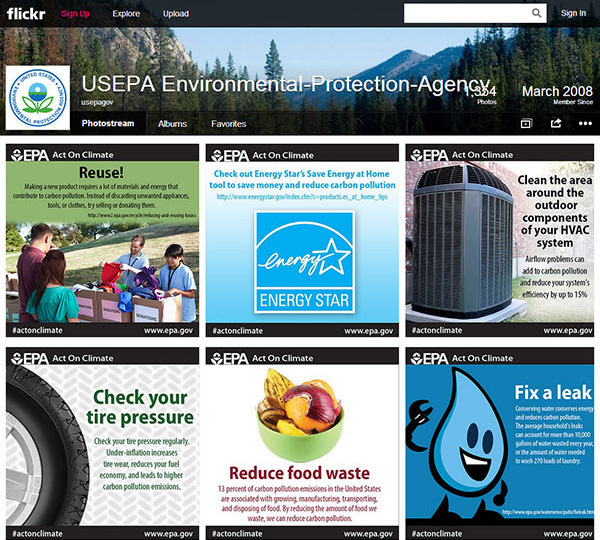 One of the most exciting activities has been the Thunderclap campaign to encourage others to take action. They far surpassed their goal of 500 supporters, getting 904 people to share their message with a combined following of 2.7 million people. Here’s what tweet streams looked like after the Thunderclap went off.

EPA has had support from a number of other federal agencies in promoting Earth Day, including the National Science Foundation (NSF)’s Google Hangout on biodiversity that discussed building robots representing various features of insects and other animals and citizen science getting involved in biodiversity issues. Participants could Tweet questions using the #NSFLive or via [email](mailto: webcast@nsf.gov). 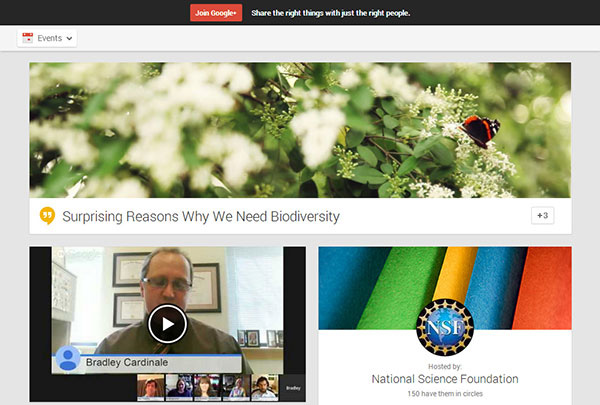 The National Aeronautics and Space Administration (NASA) is holding a #GlobalSelfie event where we are asking everyone to step outside, take a selfie, and post on Twitter, Instagram, Facebook, Google+ or Flickr. #GlobalSelfie will celebrate Earth Day and draw attention to NASA’s five Earth Science missions launching in 2014, as well as create a global portrait of the planet and the people on it, according to Susan Bell, Web Producer, NASA JPL (and creator of the #GlobalSelfie idea). 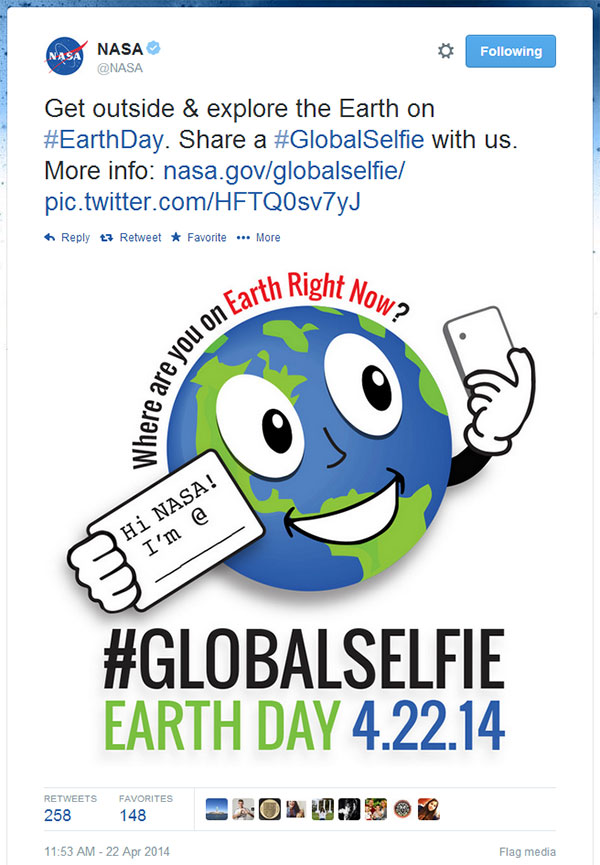 The National Oceanic and Atmospheric Administration (NOAA) is using its Twitter, Facebook and Instagram feeds to promote the unveiling of its U.S. Postal Service (USPS) International Forever Stamp, says Genevieve Contey, deputy director/managing editor for the Digital Media branch of NOAA Communications & External Affairs. The stamp, that features a NOAA visual representation of the Earth’s sea surface temperatures, allows NOAA to demonstrate the agency’s role in providing environmental intelligence. The image came from an animation created from the output of a computer model of Earth’s climate by NOAA’s Geophysical Fluid Dynamics Laboratory, with land color derived from a NASA satellite composite. 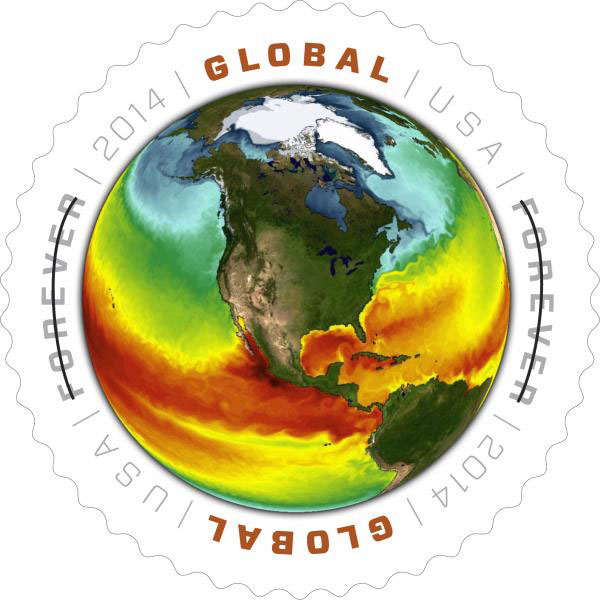 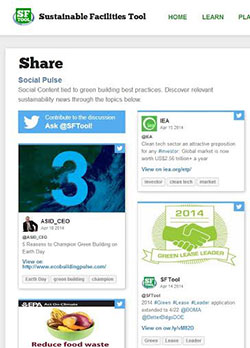 The General Services Administration (GSA) is taking to Pinterest to promote its Sustainable Facilities Tool, cross promoting government and industry Earth Day initiatives and offering actionable tips on how to take action in your office, says Michael Bloom, Sustainability and Green Building Program Advisor at GSA. The Social Pulse captures and showcases green building and Earth Day trends from Twitter so you have everything you need, all in one place.

Other agencies getting in on the digital Earth Day activities include: 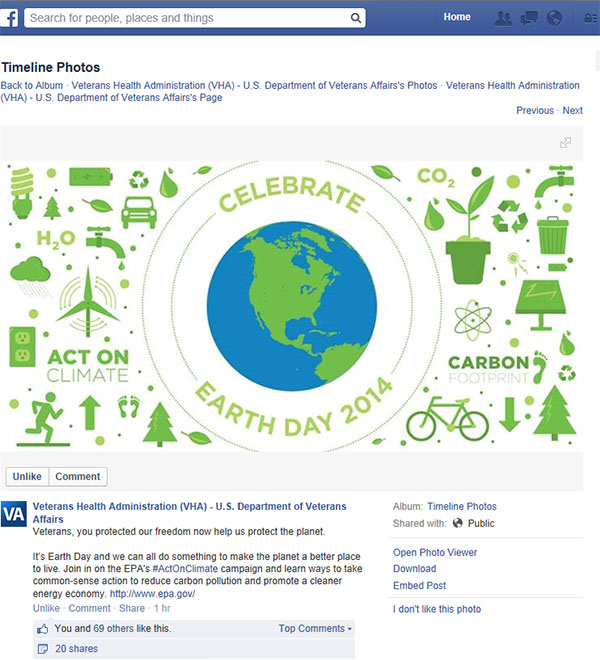 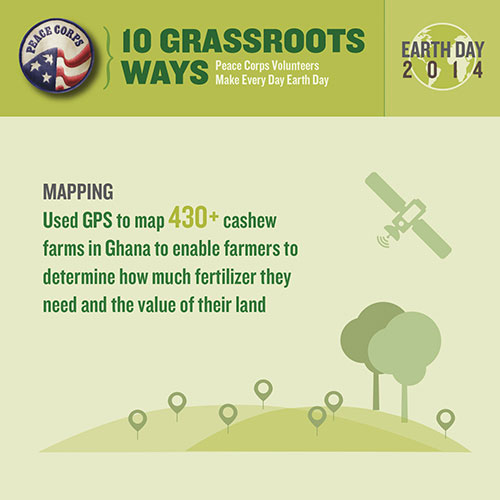 These are just a few of the great activities happening today in digital government. We encourage you to share your favorites in the Comments section.