On Feb. 15, 2013, a meteor weighing 10,000 metric tons exploded 14 miles above Chelyabinsk, Russia. Users flocked to NASA.gov for info, and we spiked to nearly 12 million page views that day, ~16 times the daily average. Our real-time analytics showed over 300,000 active visitors on the site at peak, about 100 times more than normal traffic. And, not surprisingly, we could see a huge chunk of this traffic was coming from Russia.

Before joining DAP, we used Urchin for nasa.gov analytics. Urchin is great at handling the raw tonnage, and we do miss some of its features, but, we never had the insight into real-time events that we have now. Even data that was always there in Urchin is now much easier to access and cross-reference with other data in the Google Analytics interface.

We always see the expected spikes with mission events like launches or landings, but we now also often see the unexpected: for example, a story we’re not even promoting much goes viral on Reddit, or mobile use goes way up because of an Angry Birds update that’s pushing traffic to our website.

On Friday, Sept. 6, 2013, we launched the Lunar Atmospheric Dust Environment Explorer, or LADEE, on a mission to the moon. What made this different from any other launch? People up and down much of the Eastern Seaboard were able to see LADEE streaking through the sky on the way to orbit. Our analytics suggested that people were watching their mobile devices while they were watching the skies. 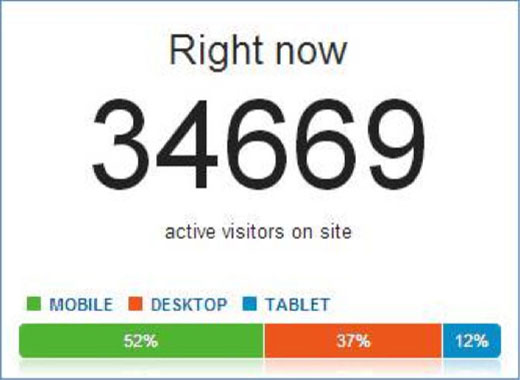 The leading locations were in the area where people could watch the launch – Maryland/DC/Virginia, Pennsylvania, New York, New Jersey, and North Carolina, with California also in the mix (the mission is managed by NASA’s Ames Research Center in Silicon Valley).

Zooming in on one of the top locations – Alexandria, VA — we could see an astonishing 86% were using either an iPhone or Android phone: 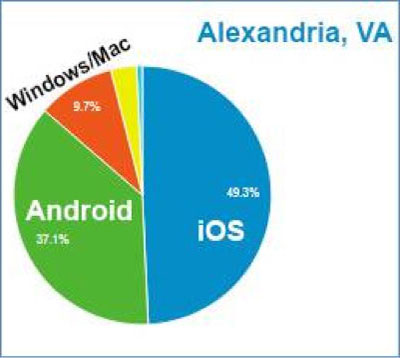 In addition to the mobile insight, we got our usual traffic metrics:

All told, this added up to our third-biggest traffic day since we started using DAP GA in February:

****And, it turned out the LADEE launch wasn’t done impacting our traffic. The week after launch, a photo went viral on the Internet showing an airborne frog “photobombing” the launch. At mid-day on September 12, “frog” is our number two search term, trailing only perennial champion “mars.” The frog photo and a related photo showing a bat clinging to the space shuttle during a 2009 launch are our top two pages on nasa.gov (excluding the home page).

We never know when traffic will make this sort of unexpected leap, but we have the DAP data to show us when it does.Originally published on the Digital Services Innovation Center blog.