Americans are rocking open data! From getting people to the emergency room faster with iTriage to helping them navigate road and rail after a disaster, people are innovating, building businesses, and creating safer communities. As developers get more sophisticated and businesses get better analytics, Data.gov needs to change to support them in new ways and your ideas will help to build that future. 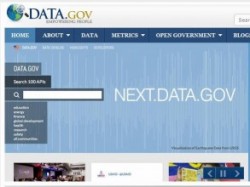 You are invited to create that new vision. Join us over the next few months developing innovative changes and ideas around open data. We’ve started by creating an open source code base and a new catalog, and we want you to help us with the next step … Next.Data.gov.

Alpha.Data.gov was launched in January to shine the light on the stories of people using government data. Whether it’s a company formed around energy data with the Green Button Initiative or a university research lab using big data to uncover new insights, Alpha highlights accomplishments from developers and entrepreneurs. Your feedback on Alpha has helped to shape our next steps.

We have also co-led an open source activity with India, Canada, and Ghana called the Open Government Platform (OGPL). The source code behind the evolution of Data.gov is available for free, and each country has made contributions to OGPL on Github. In addition to providing the Drupal code behind the successful communities on Data.gov (Energy, Safety, Research, and Ocean), we have worked with the Open Knowledge Foundation to evolve CKAN 2.0. This catalog, which went live in May, provides geospatial visualizations, easier searching, and a basis for better dataset descriptions.

Next.Data.gov, provides a new view of the front page of Data.gov featuring a large data visualization at the top, news and content from agencies and communities, and a taste of how data can be federated from more than 200 organizations. What do you think? Tell us your ideas on Twitter and Quora. Can you build a better version? Show us! Contribute code or comments via our Github site with a pull request.

Looking forward to a bright future as we create it together!

Originally posted on the Data.gov blog.