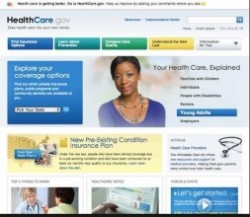 The new Healthcare.gov will sort content according to user demand with a new plugin developed for the site. For a content-heavy site like healthcare.gov, this option will allow HHS to serve popular content to readers quickly.

In April we told you about Jekyll. The new Healthcare.gov will use this free open-source solution to create flat webpages without the long load times associated with a traditional content management system (CMS). Developers created a new plugin to work with the system to make it possible for the Department to quickly and dynamically provide the site’s most popular information to visitors . This plugin will allow HHS to take advantage of some of the best features a CMS offers without a heavy load on the site’s servers.

By default, Jekyll sorts content chronologically and alphabetically. This works well for blogs, but now with jekyll-ga, we have many more options. Any metric you can track in Google Analytics — including custom variables — can be used to sort content or as a variable in our flexible templates. This will allow HHS to promote health options popular among a customer’s peers, greatly increasing the potential for satisfaction in the Health Marketplace.

The new plugin is publicly available on github so it can be use on other Jekyll sites. Check back soon for more in our ongoing series about the upcoming relaunch of healthcare.gov.