During this past month, Technology Transformation Services (TTS) continued our tradition of honoring Black History Month through our internal campaign of highlighting Black people’s achievements and societal contributions that impact our digital technologists. Members of TTS’ Working While Black affinity group shared their thoughts with the organization to celebrate the contributions of Black Americans to every facet of American life. 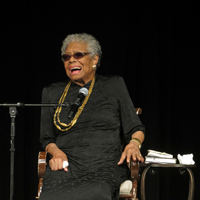 Angelou’s writings have altered society for the better, bringing greater diversity into the theater and literature. Her autobiographical works provide powerful insights into the evolution of Black women in the 20th century, and she continues to make history today as she is the first African American woman to be printed on the U.S. quarters.

Led by our Working While Black and TTS Diversity Guild colleagues, these conversations illuminate how the inclusion—or exclusion—of these talents has also shaped our nation’s history.

Black American artists have traditionally been isolated from art history. Historical work by Black artists is often under-examined and underrepresented in private and public collections. These reasons, and many more, led Black artist and curator David C. Driskell to curate Two Centuries of Black American Art at the Los Angeles County Museum of Art (LACMA - which is right down the street for me) in 1976. The exhibition was curated with the purpose of staking “a claim for the profound and indelible contributions of black and African American art makers” between 1750 and 1950.

Government services also have a history of excluding those most vulnerable with barriers to accessibility, and contributors took the opportunity to balance celebration with reflection of the challenges of the past and present.

Although we’re nearing the end of Black History Month, there’s more to share! As you might have heard by now, the 2022 Black History theme is Black Health and Wellness, established by the Association for the Study of African American Life and History. Did you know the mortality rate for Black women diagnosed with breast cancer is 42% higher than the rate of white women? Black women have a 31% breast cancer mortality — the highest of any U.S. racial or ethnic group. Among women younger than 45, breast cancer incidence is higher among Black women than white women.

The disproportionate numbers for Black women are startling and the gap continues to grow, despite the universal drop in mortality rates over the past 20 years. These numbers are personal for me, as there is a long history of breast cancer in my family, starting with my mother — who is a [two time] breast cancer survivor and was diagnosed in her early 30s. There is a lot to be said regarding practices primarily associated with (and marketed to) Black women — including hair straighteners, hair relaxers, and skin lighteners — and the increased risks. In 2019, a study was published in the International Journal of Cancer that looked at hair dye, chemical straighteners, and breast cancer risks. The study highlighted the rising rates of breast cancer in Black women, as well as our tendency towards more aggressive subtypes, such as the triple-negative subtype, and death. There were obvious links between the products commonly used by Black women and the ingredients that could pose a higher risk of the disease.

TTS applies modern methodologies and technologies to improve the lives of the public and public servants. We have a vision for a government that is trusted, modern, and provides services for all. Ultimately, TTS seeks to focus on equity through community-driven design and engaging with historically-marginalized communities to make sure we are delivering tangible value for them.

We highlight this during Black History Month, but we work to improve the experience for the public with government services, especially those who have been traditionally discriminated against or marginalized, all year long.