From the National Park Service (NPS) to the Centers for Disease Control and Prevention (CDC), the use of citizen science has become a prominent factor in the science community and a critical tool for the federal government. 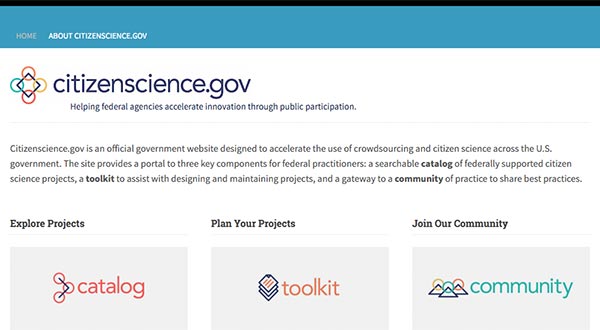 A recent DigitalGov University (DGU) webinar provides an introduction to the concept and shows how the federal government is using it to engage the public and address important issues.

The federal government has seen a surge of citizen science initiatives thanks to several developments, starting with a memo from the White House Office of Science and Technology Policy (OSTP) that outlined ways agencies can use citizen science. The memo also gave birth to CitizenScience.gov, the government’s new hub for all things citizen science.

“It’s essentially the first portal for everything related to citizen science and crowdsourcing in the federal space,” said Kendrick Daniel, who manages the site for the General Services Administration (GSA).

Daniel used the recent webinar to provide viewers an inside look at the already thriving website. Joining him for the presentation was Elizabeth Tyson, co-director of the Commons Lab at the Woodrow Wilson International Center for Scholars (Wilson Center), who helped to define what citizens science is and offered examples of projects from the federal government.

“Researchers within the federal government are always looking for new ways to involve the public,” Tyson said. “Citizen science and crowdsourcing allows for a higher and more meaningful level of public engagement.”

Tyson defined citizen science as “volunteers participating in any step of the scientific process.”

Beyond this general definition are three big ideas that are enhanced by the new website and a growing federal community of practice:

If this sounds like something you or your agency want to be a part of, you should check out the webinar and spend some time exploring CitizenScience.gov.

There, you will find a diverse community that is transforming society within the learning and the science worlds through a variety of collaborations. It’s a perfect illustration of public engagement and open innovation, bringing together people to help solve scientific problems regardless of age, gender, race, class, or other factors.

Zohaa Ahmad is a rising junior at Riverside High School in Leesburg, VA who is interested in pursuing the medical field in the future. She is interning with the Innovation Portfolio in the Technology Transformation Service (TTS) Office of Citizen Services and Innovative Technologies (OCSIT) at GSA for summer 2016.

Learn more about DigitalGov University (DGU) and register for an upcoming event today! If you’d like to find out how to create an online or in-person DGU event, or partner with them on your own event, please contact the team via email.