‘Twas the night before Christmas, when all through the house,

Not a creature was stirring, not even a mouse;

The stockings were hung by the chimney with care,

In hopes that St. Nicholas soon would be there;

The children were nestled all snug in their beds;…

…wondering when Santa was coming? “Let’s check!” they all said;

So they pulled out their smartphones and tracked Santa’s flight,

and played the app’s games ’til close to midnight. 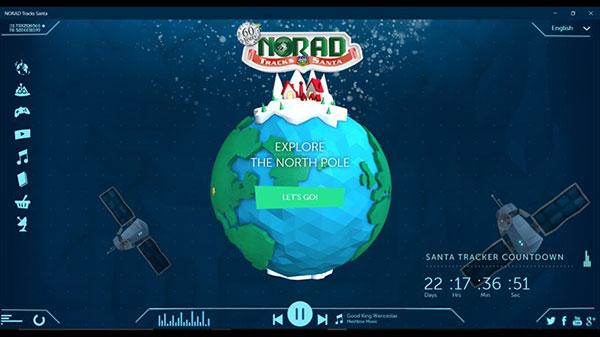 North American Aerospace Defense Command (NORAD) in Colorado Springs, Colorado, has been surveilling and tracking Santa’s journey in the sky since 1955. “NORAD Tracks Santa” is an annual Christmas entertainment program. Every year on Christmas Eve, “NORAD Tracks Santa” follows Santa Claus as he leaves the North Pole and delivers presents to children around the world.

The NORAD Tracks Santa App is the official mobile app of the NORAD Tracks Santa program. You may think the countdown in the app is to December 25, but no, it’s not. It’s a countdown to when the app begins tracking Santa’s flight. You can download the app for Windows 10 or Android or view the responsively designed website on your mobile devices and watch the countdown to Santa’s flight. Both the app and website are multi-lingual for the 60th Anniversary edition; users can choose from eight languages this year: English, Spanish, German, French, Italian, Japanese, Chinese, and Portuguese.

Starting at 12:01 a.m. MST (2:01 a.m. EST) on December 24, website visitors can watch Santa make preparations for his flight. Beginning at 4 a.m. MST (6 a.m. EST), trackers worldwide can use the app’s Contact Us screen to call and speak with a live phone operator to inquire as to Santa’s whereabouts or by sending an email. NORAD’s “Santa Cams” will stream videos on the website as Santa makes his way over various locations. At any time on December 24, Windows Phone users can ask Cortana for Santa’s location, and OnStar subscribers can press the OnStar button in their vehicles to locate Santa.

The magic starts when you click on “Let’s go!” Explore “Santa’s Village” at leisure. Visit the library to learn about Santa, his magic sleigh, and holiday traditions around the world. You can visit the Arcade and play a new game every day—make some new friends and impress them with your problem solving skills. Listen to Santa’s favorite holiday songs at The Music Stage. 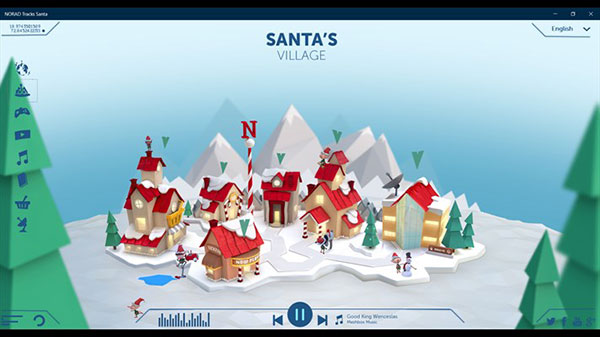 Don’t forget your popcorn when you visit the Theater to enjoy movies on Santa and NORAD and the gift shop. Visit NORAD HQ to know more about NORAD’s mission, and learn how they track Santa’s flight around the world. In “Secret Santa Files,” view history and highlights of the program’s 60-year history tracking Santa’s yuletide journey.You can download this and other government apps through the USA.gov Federal Mobile Apps Directory. Do you have a federal app that is not listed on the Directory? Take part in the Great Federal Mobile Product Hunt.