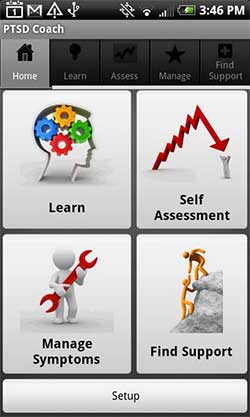 The National Center for Telehealth and Technology (T2), part of the Department of Defense, offers multiple apps that address health care for service members in a variety of ways.

At a talk with the MobileGov Community of Practice earlier this year, Dr. David Cooper, a psychologist for T2, said the apps are a way to provide services and make appointments more effective and efficient for patients.

“Mobile intervention is helpful because I can give [an app] to someone before they even come to my office, and someone can try it out and get more instant relief,” Cooper said. “For example, diaphragmatic breathing is something I would teach every patient; with the Breathe2Relax app [on Android and Apple], they can now learn these techniques at home. Then, they can come in and talk about how it went.”

The apps can also reach service members who may be reluctant to reach out for help.

“With all of our apps, because they are focused on psychological health, we have to focus on stigma,” Cooper said. “Service members don’t want to come in and see a provider because they are worried it will hurt their careers. We go overboard to make sure it is anonymous usage and that we aren’t collecting demographic information.”

T2 developed a PTSD Coach app [on Android and Apple] to assist veterans and active duty personnel (and civilians) who are experiencing symptoms of Post Traumatic Stress Disorder (PTSD). The app provides information about PTSD, a self-assessment, a symptoms tracker, and assistance in identifying support outlets, including a link to the National Suicide Prevention Hotline. The app was designed to be used as in conjunction with treatment but can be used as a stand-alone education tool.

Cooper and his team view mobile as a 21st century way to provide high-quality, research-backed services. 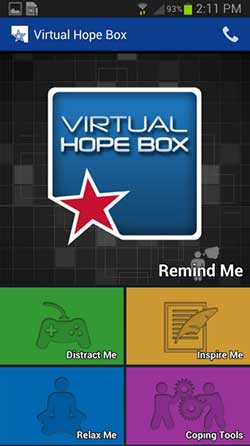 “We find something that is evidence-based, and we believe that there is no reason that it shouldn’t also be available on a mobile platform,” Cooper said. “For Virtual Hope Box [on Android and Apple], we were inspired by physical hope boxes: boxes people filled with music, photos, etc. that help users cope with symptoms of depression. So we took that hope box idea and put it on a phone.”

Cooper’s team does field testing and conducts patient and provider focus groups. For Virtual Hope Box, they learned that more patients would use the virtual version than a physical version.

The preferences and realities of healthcare providers are also considered in the app development process. A “prescription pad” with a list of all T2 mobile apps is one way that they have marketed the apps to providers.

“We have to cater to both patients and providers: if I create something that isn’t going to fit in the provider’s workflow, they aren’t going to use it,” Cooper said.

_T2’s apps can be found on the Mobile Apps Directory on USA.gov. Do you have a federal app that is not listed on the Directory? Take part in the Great Federal Mobile Product Hunt. _