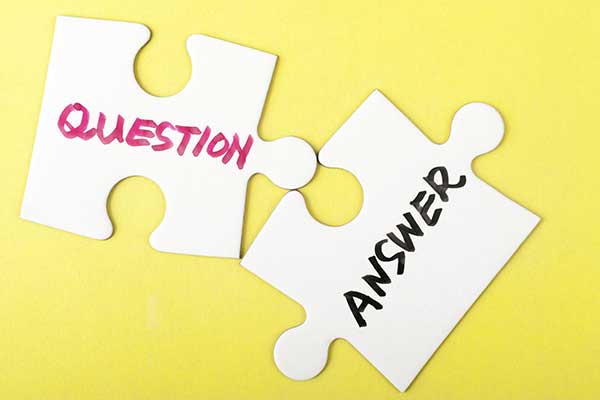 There’s no doubt that traditional social media sites like Facebook and Twitter have transformed how we communicate with stakeholders. Quora is another tool for agencies seeking to engage highly-educated thought leaders and influencers, policy makers, entrepreneurs, scientists, engineers and journalists worldwide.

The brainchild of two former Facebook employees with the backing of Wikipedia’s founder, Quora aims to share and grow the world’s knowledge by serving as a centralized Q&A site. Essentially, it is a giant hub for FAQs where users pose questions that others answer on everything from historical events to emerging technologies and everything in between. According to Forbes, Quora has 400,000 topics, and popular Q&A writers can get 1 million pageviews a month.

From President Barack Obama and U.S. Chief Technology Officer Todd Park to Congressman Eric Cantor—even Facebook CEO Mark Zuckerberg—many influential people are using Quora. With its popularity, shareability, and ease of use, Quora can help advance understanding of technical topics, shed light on agency missions or shape the dialogue regarding why government services matter to the American public.

So far, the White House, the Departments of State, Defense, Homeland Security, Commerce, Energy and Interior, as well as the U.S. Congress and Senate, are among the agencies tagged as “topics” on the site. Similar to Wikipedia, the discussion is managed by the public, and no individual or entity other than Quora administrators can control a question or a page. Individuals can contribute to the discussion simultaneously in a personal capacity and as representatives of their organizations. For example, Jimmy Wales answers questions as “the founder of Wikipedia,” whether he is acknowledging that he’s seen a whale or affirming Wikipedia’s independence from government control.

With a government-wide Terms of Service already in place, it’s a ready-to-use tool. And by tracking what types of questions are being asked and learning what audiences are curious about, agencies can better shape their dialogue and content strategy.

What also makes Quora attractive is its ability to combine the popular features of well-known social media sites while mimicking the civic commons idea of Wikipedia. In particular, Quora has a “follow” feature like Twitter and a Q&A system like LinkedIn or Yahoo Answers. Blogger David Griner described Quora as “the community side of LinkedIn, merged with the organic networking of Facebook, smashed up with the informative aspects of Wikipedia.”

What People Are Asking

Whether Quora users are more comfortable posing questions to satisfy their curiosity or showing their expertise by providing answers, the site provides a forum for both. Users can ask, answer or follow question topics and specific people, which creates a stream of information into their topic feeds. Quora also started a blogging platform in January 2013 that can be leveraged to provide more in depth responses. 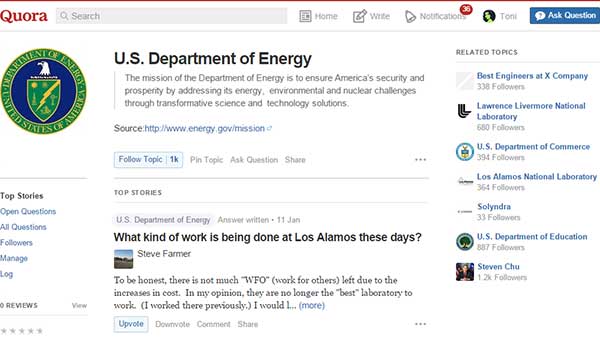 How to Get Started

To get started with Quora, first establish a topic page for your agency, as well as a bio. I would encourage you to set up your own account and encourage your colleagues and managers to follow suit. (Note that Quora’s policy is that you must use your real name.) All Quora users have to sign up as individuals, but they are free to write answers representing their agency or organization. If you answer on behalf of your agency, you can state in your answer that you are answering on your organization’s behalf.

After your account is set up, you can then choose to follow topics, such as Government, Science, Technology, and Economics, or follow specific people. Quora then creates a personalized feed. Quora also has a mobile app for the curiosity seekers on the go.

How to Measure Success

To convince management of Quora’s ROI, you can use Quora’s free analytics to determine which of the Q&As posted are the most popular, including tracking the number of up and down votes a particular Q&A received, how many followers there are to a particular topic, the number of views and the number of shares.

Another way to effectively use Quora to engage stakeholders is to schedule and staff a “Quorathon”—a set-aside time to write content for a predetermined time, including asking, answering, upvoting and commenting. It is like a Twitter chat or Google Hangout where people ask questions and converse during a certain window and subject matter experts are available to respond.

To double or triple the impact, your agency could also use the Quorathon in combination with a Google Hangout or Tweetup where people either meet online in in person and post Q&As in real-time.

While I am using Quora strictly for personal reasons in order to follow government agency and scientific and technical topics, my research has convinced me that this is a valuable communication channel for government agencies that want to engage in a lively, fun debate with their constituents. My home agency, the Department of Energy, does have a topic page, and the agency I now work for on detail—the Advanced Manufacturing National Program Office—may soon have a Quora presence as well.

You can always follow the White House’s lead when it issued this challenge to citizens to share their ideas on Quora about the Startup America Policy Challenge. In the past, the White House used Quora to ask the public how it should focus on its transparency efforts.

If your agency is on Quora, let us know how it is working for you and what lessons learned you might have to share. We’d love to hear how it’s working for you and what you’ve learned from what your stakeholders are asking.Carolyn Hinkley is a Web Project Manager for the Office of Energy Efficiency and Renewable Energy in the Department of Energy. This post was written in her capacity as a part-time remote detailee to the Advanced Manufacturing National Program Office at the National Institute of Standards and Technology.