Around the time that Tim Fullerton of the Department of Interior delivered his webcast to DigitalGov audiences about publishing video content to Facebook, we at the Broadcasting Board of Governors were comparing the differences in user behavior on the Facebook and YouTube video platforms (note: BBG is the federal agency that oversees all U.S. civilian international media, including Voice of America and Radio Free Europe. BBG content reaches over 215 million people around the world each week in 61 languages).

The Web and mobile video landscape continues to evolve quickly and the digital titans are getting extremely aggressive about controlling how video is viewed on their platforms. With almost 2B mobile devices sold in 2014 and YouTube announcing that 40% of the minutes watched on their platform are from mobile devices, it is obvious why everyone is trying to figure out how to steal ad dollars from TV and control the experience that presents video on mobile devices. Previously, publishers simply uploaded content to YouTube and then embedded those players into Facebook, Twitter and other social platforms. Now, Facebook wants publishers to upload video directly to their platform so that they can control the monetization of those clips in the future (Note: there are stories floating around now that Twitter will also require native video uploads. Twitter recently released an app that allows users to upload videos directly to the platform via mobile devices only).

In trying to encourage use of the Facebook video platform, Facebook is displaying more and more video that is uploaded directly to Facebook and fewer embeds from other video platforms like YouTube. Publishers who relied on video plays from links and embedded players on Facebook scrambled to upload their clips directly to Facebook in order to capture audience, but the question remained as to how their content would perform. And what impact would Facebook publishing have on existing YouTube workflows? The goal of our test was to compare how our content performed on both platforms. Here are the highlights of our findings:

Video that was uploaded directly to Facebook got significantly more likes, shares and comments than the same content that was uploaded to YouTube. We observed that the bulk of the shares, comments and likes happened in a short period of time after posting to Facebook (usually within 6 hours of publishing) and then trailed off. Note that Facebook shares only happen within the Facebook environment. This is because the Facebook player isn’t easily shareable outside of Facebook, whereas the YouTube player can be embedded across the Web.

On the plus side for Facebook, a new set of YouTube-esque features were just released that are sure to drive more engagement on the Facebook platform. First, there is a new ‘featured video’ area that will allow publishers to showcase one video at the top of the video page. Secondly, publishers will now be able to create video playlists within Facebook. Both of these features are sure to drive time spent and clips viewed on the Facebook video platform. 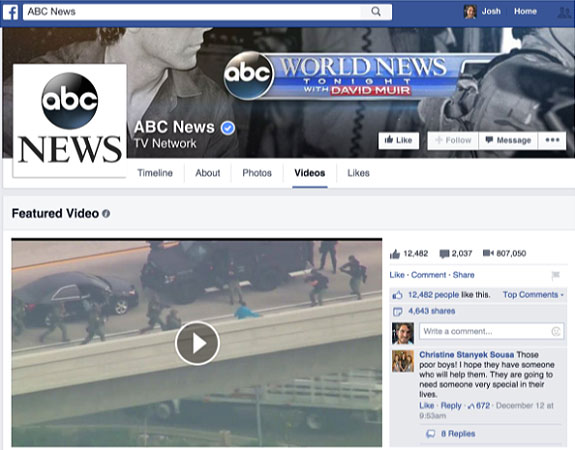 In our tests, we saw that videos posted on YouTube had longer viewing durations and continued to gather views for longer periods after initial upload than videos uploaded to Facebook. It’s important to note that videos on Facebook start to play automatically by default when a user scrolls over them on phones or PCs. Alternately, YouTube videos need to be clicked to be viewed. Since the user needs to initiate the play, it’s probable that the user is truly interested in the content and that view durations will be longer.

In our tests, we saw that clips on YouTube were watched for up to 30% longer than the same content posted on Facebook. Even shorter clips (under 90 seconds) were viewed for a longer time on YouTube. Our tests also showed that it took longer for YouTube play counts to hit critical mass, but over time YouTube clip play counts were similar to those of the Facebook plays. As YouTube players were embedded on other sites and got indexed in YouTube search products (Google Video search, YouTube search, etc.), we saw additional plays well after the initial publish.

Two Platforms Are Better Than One

Also, realize that the Facebook video platform is still very young and we don’t know how it will evolve. We don’t know if Facebook will continue to push video as much as they are currently doing, if they will add pre-roll advertising to clips or if they will adjust the auto-play functionality. With that in mind, be sure to take advantage of all video platforms at your disposal. Be sure to experiment, learn from your audience and adapt to this fast changing landscape.Randy Abramson is the Director of Digital Audio/Video Products and Strategy in the Office of Digital and Design Innovation/BBG.