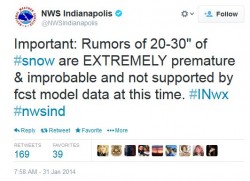 During the run up to a recent winter storm, Twitter was aflutter with reports of 20-30 inches of snow falling across wide swaths of the Midwest. Unfortunately for snow lovers, those rumors were highly speculative and unfounded. That didn’t stop members of the public from contacting their local National Weather Service (NWS) Weather Forecast Office (WFO) with questions about the storm, so NWS Meteorologist Mike Ryan from the Indianapolis WFO used his office’s Twitter account to inform the public that “Rumors of 20-30″ of #snow are EXTREMELY premature & improbable and not supported by fcst model data at this time.” That Tweet was retweeted 169 times as truth tried to catch up with fiction, thus effectively ending the rumors.

Even the AP ran a story about Ryan’s social media efforts, inquiring why he took to Twitter. “’We wanted to try to alleviate these rumors because the social media network is just kind of running out of control,’” Ryan said.

The National Weather Service, part of the National Oceanic and Atmospheric Administration (NOAA), has been engaging the public through social media for the past several years. NOAA and the weather service used Twitter and Facebook, as well as traditional methods of notifying the public and partners, during several recent severe weather events, including Sandy in 2012 and the historic tornado outbreaks across the South in 2011, as well as the EF-5 tornado that struck Moore, Oklahoma, in 2013. Outreach is typically handled admirably by communications professionals and NWS meteorologists.

All Government Employees are Communicators

What is different in this case is a meteorologist took to the social media universe to quickly communicate with the public via Twitter about forecasting a “non-storm,” instead of forecasting about an upcoming storm.

He reached out directly to the public to:

In concept, federal employee’s use of social media isn’t that new. Meteorologists, and all government employees, have been interacting with the public for years. Employees have email, often write papers or memos for public consumption or present at conferences. Yet, Twitter and other social media platforms can create some additional leadership and governance concerns.

When I started at the Department of Commerce three years ago, weather forecast offices did not have Twitter accounts. It wasn’t clear at the time whether or not social media was considered outside the scope of work for meteorologists. The newness also had the potential for communications problems, and one additional “other duty as assigned” on top of an already full workload presented additional challenges.

However, NWS leaders soon recognized that Twitter was effective for public engagement, had confidence that their staff could handle themselves in a professional manner and provided guidance to make this effort successful. When NOAA decided to equip their offices, including National Weather Service offices, with Twitter accounts they did three smart things:

It is often heard that government doesn’t move quickly enough to meet the needs of citizens, but as NOAA NWS has demonstrated, government can and does.

What can your Agency do better to equip all employees with the tools necessary to communicate their mission?