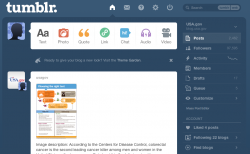 When HHS’s Katie Gorscak was looking for a way to share Stopbullying.gov’s information with teenagers, she looked at her options on social media.

New reports seem to come out regularly talking about how teens are fleeing “traditional” social media sites, but Gorscak knew her target audience made up the power user base of the social-blogging platform Tumblr.

Looking to leverage that, Gorscak launched a Stopbullying.gov pilot on Tumblr in April 2013. She shares resources and information for teens to help prevent or put a stop to bullying. In the time since launch, she’s amassed 10,000 followers in her target demographic.

Since 2011, when USA.gov established the first federal Tumblr, several agencies have signed up to use the platform — each approaching the tool slightly differently to meet their own agency missions.

On February 19, a group of four federal Tumblrarians — Jessica Milcetich from USA.gov, Darren Cole from the National Archives, Gorscak from HHS and Michelle Thomas from BLM, joined DigitalGov University to showcase how they each use Tumblr in a different way to support their agencies’ missions, drive engagement and reach their target audiences.

Highlights from the webinar include:

You can view a recording of the presentation below: