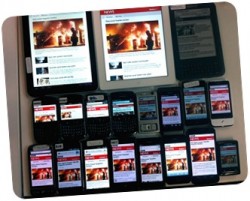 Smartphone manufacturers shipped a whopping 1.004 billion smartphones last year, up 38.4% from 2012’s shipments of 725.3 million, according to data from IDC. Worldwide, phone makers shipped more than 1.8 billion cellphones, with smart devices accounting for 55.1% of the total. During the fourth quarter, 284.4 million smartphones shipped around the world, up 24.2% from the 229 million shipped at the end of 2012. The volume and growth attribute to the smartphone’s continued popularity.

Whether smartphone makers shipped 1.004 billion or 990 million, it’s no mystery that smartphones are the “it” device that the public wants. These metrics of how our citizens are using mobile for traditional digital channels are important to government agencies to use the most effective mode to communicate to public. Think mobile first!