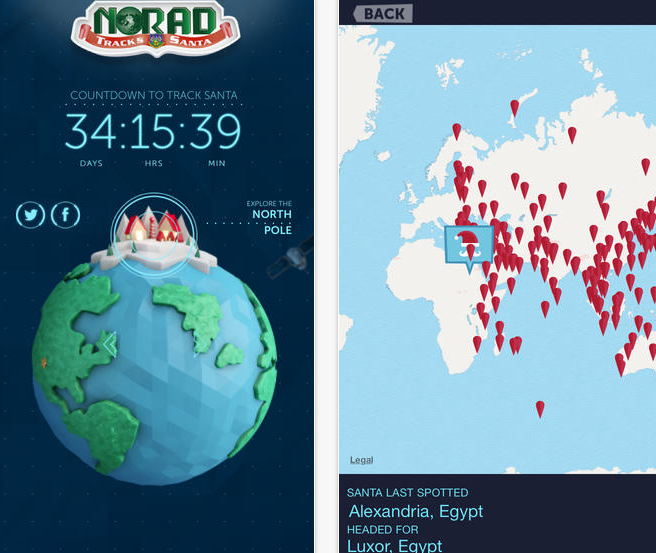 What started out as a misdirected phone call to NORAD’s predecessor agency in 1955 turned into a much anticipated holiday tradition for kids and adults alike.

Fifty-eight years later, NORAD is still tracking the now 1600-year-old Santa’s whereabouts, but this year the agency is offering children and their parents a visually enhanced mobile app on 3 platforms and website (non-mobile) experience to follow along.

The 2013 NORAD Tracks Santa App places the young and young at heart in the middle of a rather adorable Santa’s North Pole village (it invokes high-tech “claymation”). Here they can explore NORAD Headquarters’ “secret” Santa surveillance files, a Library stocked with cool Santa factoids – including official specs for his sleigh – and the Arcade that features last year’s hilarious, if challenging Elf Toss/Thin Ice and other games & activities depending on your operating system.

The main event, though, starts December 24 when NORAD asks us to return to the app to join its intelligence apparatus as it tracks Santa, who will commence his intrepid round-the-world trek starting at the International Date Line and then steadily head west. “Live tiles” will keep users update as to Santa’s latest location.

(*A helpful note: The clock you see on the app’s home screen is counting down the days until NORAD’s Santa tracking mission begins — the 24th.)

So, get a move on: Hang those stockings, open up the chimney flue, put out the cookies and milk, and download the app for your iPhone, Android or Windows device today …There are only a few more days left until Christmas Eve, as the app countdown clock keeps reminding me.

Happy Holidays to all, and to all a good night!

Deck your mobile device home screens with more government apps like the NORAD Tracks Santa App by caroling your way over to the USA.gov Apps Gallery.