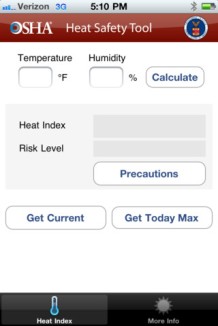 Mobile Gov Experiences are agency stories about creating anytime, anywhere, any device government services and info._ This entry is a story shared by the Department of Labor.

The Heat Safety Tool provides the heat index for your work site and precautions to prevent heat illness.

OSHA developed the Heat Safety Tool smartphone app as part of a nationwide outreach campaign to raise awareness among workers and employers about the hazards of working outdoors in hot weather.

OSHA’s contractor developed the Android version first, working through some accessibility issues. The developers did not use a cross platform software development kit (SDK) and instead the iPhone application was created by porting the Android app pixel by pixel into iOS.

In iOS, the app became a very confusing experience. User interface conventions were thrown out the window and what happened was an app that had the following issues:

Design for the individual platforms from the beginning. Headaches and delays later in the process from usability or accessibility issues can be headed-off right from the beginning. One way to do that is by following a good Statement of Work model when contracting for mobile products.