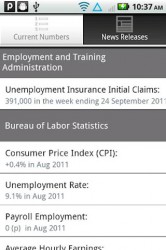 The Labor Stats Application presents the most up-to-date numbers and news releases for top employment statistics published by Department of Labor’s Employment and Training Administration (ETA) and Bureau of Labor Statistics (BLS).

The Labor Department created the app to better share important information using the fastest, simplest, most wide-reaching means available, and this app increases the accessibility of Labor’s statistical data.

Launched October, 2011, the Android app has been downloaded 1,400 times and the iPhone app 2,600 times. By using a developer key with the API, the Department of Labor will be able to gather mobile data use to track the apps’ usage.

User interface (UI) standards differences between the platforms can be subtle, but no less important. Our goal was to ensure that the platforms’ conventions were faithfully followed so that we would not end up expecting the users to learn a new way to do what they already do in other apps on their device. Given that the Android conventions were rather thin, we looked to the standard built-in apps made by Google themselves for guidance on the Android way. Google’s newly published UI guidelines for Android 4 are welcome guidance.