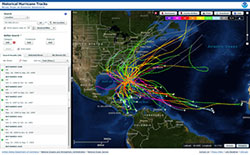 Last June, President Obama launched a Climate Action Plan to cut carbon pollution, prepare communities for the impacts of climate change, and lead international efforts to address this global challenge. The plan recognizes that even as we act to curb the carbon pollution that is driving climate change, we must also prepare our citizens and communities for the climate impacts that are already underway across the country.

One of the efforts described in that Climate Action Plan is the Climate Data Initiative, a broad effort to leverage the federal government’s extensive, freely-available climate-relevant data resources data to spur innovation and private-sector entrepreneurship in order to advance awareness of and preparedness for the impacts of climate change.

The Climate Data Initiative, launched in March 2014, leverages commitments from government and the private sector to unleash data and make it accessible in ways that can be used by communities and companies to prepare for climate change. It builds on the White House’s other Open Data Initiatives—in areas such as health, education, and safety. It unleashes federal data relevant to addressing climate-related risks and vulnerabilities via a new beta-phase section of the Data.gov: Climate.Data.gov.

Climate.Data.gov will be used by innovators who can develop data-driven tools that are useful to decision makers in communities and companies. The Climate Data Initiative is also engaging with stakeholders and outside partners, bringing innovators together with people who will use climate information. New innovation challenges and strong commitments from private sector companies to leverage their technology platforms are already beginning to incentivize tech experts, businesses, individuals, and organizations to harness open data to help communities prepare for climate change. For details on these commitments, see the White House fact sheet.

The Climate Data Initiative is organized around thematic areas of climate-change risk and impact, which are closely aligned with the findings of the newly released Third U.S. National Climate Assessment. A team of federal experts works in each thematic area to build and deploy resources on Climate.Data.gov for use by data innovators. Coastal Flooding and sea-level rise is the Climate Data Initiative’s pilot theme, with more than 100 related datasets and tools launched in March 2014 on Climate.Data.gov. Going forward, the Initiative will expand to include data from other themes areas, including Food, Energy, Human Health, and Ecosystems.

Each team has developed a series of key questions to frame and focus their efforts and drive innovation to build solutions that can work on the ground. For the pilot theme, key questions include: “What areas currently are at greatest risk of coastal flooding?” and “Where are vulnerable populations, infrastructure, and sectors in relation to the flooding risk areas?”

Federal experts work with a Data Coordination Team led by NASA to gather and deploy available federal data that could help answer these key questions. They work with Open Data teams in agencies who are hosting the data to make it accessible. The General Services Administration’s Data.gov team then works to document and catalog the datasets in the new Climate.Data.gov portal. This collaborative, cross-government approach ensures the widest reach possible when seeking out data to unleash, and can also increases awareness of their existence—making data available for new uses beyond the original uses planned by a particular agency.

Curt Tilmes is a Program Manager in the Earth Science Division of NASA.