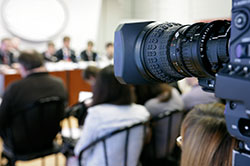 In support of open government, the U.S. Nuclear Regulatory Commission’s (NRC) expansion of webstreamed meetings has allowed more participants around the country to hear about existing and proposed nuclear sites. It was lauded in a recent White House Office of Science and Technology Policy (OSTP) blog about the upcoming 2014 Open Government plans and achievements from past plans. An agency that prides itself on openness in its regulatory activities, NRC has been webstreaming public meetings since 1997, when the Office of Information Services conducted a “pilot” test of nine Commission meetings to ascertain the interest of stakeholders and the public in viewing these meetings, as they took place over the Internet.

The pilot test garnered such positive response from the public and stakeholders, as it gave the ability to monitor NRC public meetings without having to travel to the NRC HQ campus, that the program was transferred internally to the Audio-Visual group and was implemented in 1999. It was approved as part of an overall effort to make NRC business more accessible and transparent to the public.

Back in the early 2000s, most home computers didn’t have pre-installed webcast software or high-speed Internet access, which was a challenge for the NRC, so it simultaneously transmitted using two of the most commonly used streaming formats.

Today, to further maximize viewing access, the NRC allows the Internet audience to watch the meeting webcasts in “realtime” (as the meetings take place), or later (as it better fits their own viewing schedule) as an “archived” webcast downloaded from the NRC webpage. Of the two options, the audience seems to prefer the realtime option, according to Lance Rakovan, Senior Communications Specialist at the NRC. The average viewership is between 50 and 500 viewers, across the three two options, depending on interest in the topic.

Although the NRC webcasts aren’t interactive in real-time, the webcast webpage does solicit questions and feedback from the audience.

Here are a few tips your agency should think about before starting a webstreaming program: