A review of the Digital Analytics Program (DAP) data confirms what many are already saying: Content is being viewed on mobile devices more than ever before, and the percentage of sessions via mobile devices is growing.

Three things are evident when looking at the breakdown of sessions on federal government websites across device types over the last three years: 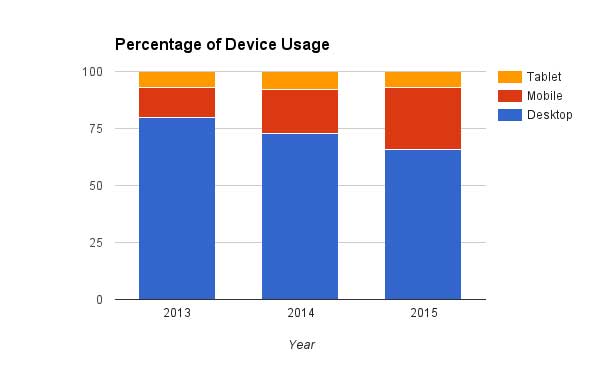 Within the last year, we saw the combined mobile and tablet percentage exceed one-third of all sessions. A third of the time, content on DAP-participating websites is viewed via mobile or tablet, which has significant implications for Web design, responsiveness and mobile websites.

Brands and Devices_Note: In an effort to make things simpler, the term “mobile” is used in the following paragraphs to refer to both handheld mobile devices and tablets._

If we look at mobile sessions on their own (not compared to desktop), Apple devices account for almost half of the total mobile share in 2015. The iPhone (34% of mobile sessions) and the iPad (15%) combine to make Apple the most used mobile brand. That said, sessions viewed on one of the many versions of the Samsung Galaxy add up to make it the number two device, contributing about 21% of the share of total mobile sessions. As evidenced in the chart below, after that, there’s quite a dropoff. LG and Motorola represent about 8% of mobile sessions combined; HTC, Sony, Nokia and Amazon all have slightly over 1% each (not shown in chart).

Another interesting fact: In a 30-day sample, over 1,000 different mobile brands and over 9,000 distinct mobile devices were used to access DAP-participating websites. 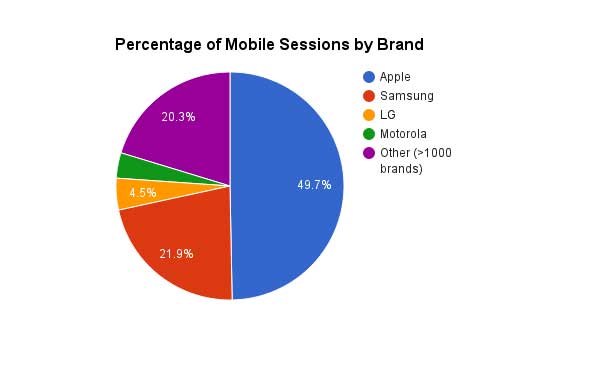 Last week, we did some analysis on overall browser usage. But one needs to look a bit deeper into the DAP data to understand the mobile browser trends. Since some browsers are mobile-specific (like Android) and others are not (like Safari), we broke down the browser usage for mobile sessions (includes both mobile and tablet). 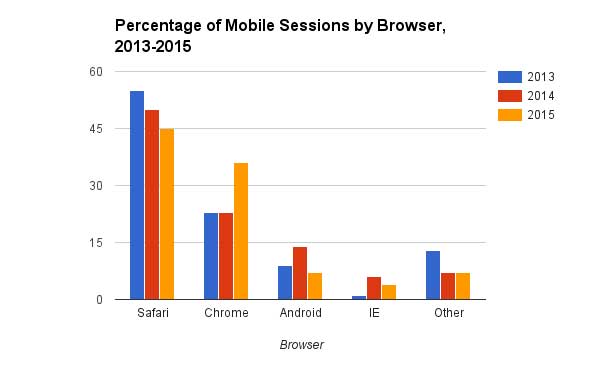 In sum, one-in-three visits to federal websites are on a mobile device (including tablet) and that number is increasing. The majority of mobile traffic is coming from either an Apple or Samsung device and 80% of the sessions come via either Safari or Chrome browsers.

We hope this information proves useful as you think about the maintenance, design and creation of federal sites!

*For all DAP figures cited, the date range of August 16 – September 15 was used in the three consecutive years (2013, 2014 and 2015) across all DAP-participating websites. The number of sites participating in DAP increased yearly, so the data included in the yearly analysis was represented by a different sample size of websites. This information should be used to provide a general insight into the public’s behavior trends.Author’s Note: This is Part 2 of a blog in which we use data from the Digital Analytics Program (DAP) to discuss shifts in the ways the public interacts with U.S. federal government websites. This part focuses on mobile vs desktop usage, while Part 1 discussed browser usage. The DAP collects data from more than 4,000 U.S. federal government websites. See more data at analytics.usa.gov. To learn more about the Digital Analytics Program, request access to the data (federal employees only) or to learn how to participate, email DAP support.