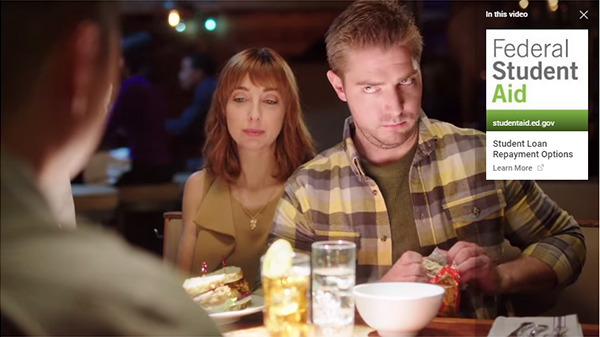 For millions of Americans, federal student loans have made it possible to get a college education. For many, moving forward after college can become an overwhelming challenge. In 2014, the Department of Education had 41 million borrowers and a loan portfolio of $1.1 trillion. The stat alone speaks to the issue of loan repayment and its magnitude in our country. To make the repayment process easier, the U.S. Department of Education’s office of Federal Student Aid (FSA) runs campaigns that are meant to inform borrowers about the repayment options available to them.

Specifically, the campaign is designed to:

The campaign runs from May to June, graduation season, the ideal time to reach borrowers before they go into repayment.

The campaign typically consists of social and paid digital media, including native advertising and gaming placements. This year, FSA decided to mix things up in order to improve the effectiveness of their campaign. The new campaign involves old tactics from prior campaigns mixed in with new tactics.

“Unlike the campaigns we have done in the past where owned and paid digital were the focus, this campaign was truly an integrated marketing campaign,” said Nicole Callahan, Digital Engagement Strategist at FSA. The new tactics were driven by data that communicated directly to the needs of borrowers. “Using search, social media, and website data, we redesigned the repayment section of our website to focus very specifically on top tasks and driving action.”

Additionally, FSA did a variety of things that were in direct response to the needs of borrowers:

All of these new tactics are based on website search data and the most popular call center topics from the Federal Student Aid Information Center. “The data-driven nature of this campaign has played a huge role in making the campaign a success,” said Callahan. “We analyzed data every step of the way, from A/B message testing, to website and conversion data, to video data. We constantly made adjustments to our tactics and content based on the data, which resulted in an extremely efficient campaign.”

Another major component of the new campaign is the Matt and Mike video series that comically depicts to borrowers that you do not have to take drastic measures to repay student loans. Since the launch of the campaign, FSA has released a new video every week to keep the Matt and Mike series fresh and to garner interest. The video series garnered more than 10 million views over the course of the campaign.

“They’re fun!,” said Callahan. “The things Mike does are outlandish, but relatable at the same time. There probably aren’t many people who recycle the milk from their cereal or get a pet alpaca so they can make their own socks, but the concept, cutting corners to save a few dollars, is something all of us can relate to. The message we’re trying to drive with these videos is that your student loans don’t have to stop you from living your life.” 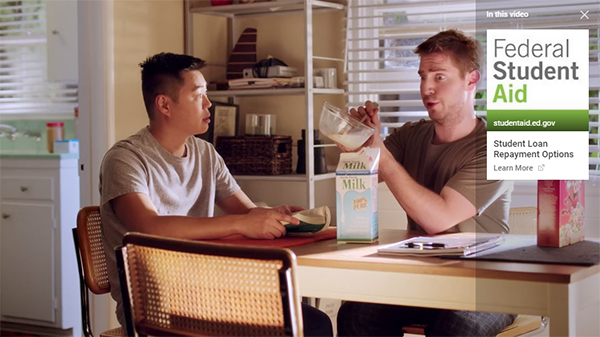 In addition to views from the video series, the campaign garnered more than 66 million impressions, drove more than 68,000 social media engagements, increased FSA’s social media community by more than 12,000, and drove almost 700,000 visitors to their websites.

The Matt and Mike video series was not the only major driver of traffic in the FSA’s campaign. Another major component were strategic partnerships that FSA formed with organizations that had direct access to borrowers. The use of partnerships such as these is a helpful way for government agencies to reach new audiences.

“Working with partners that have the captive attention of the audience we’re trying to reach has proved to be a great success,” said Callahan. “For example, one of the partners we worked with this time around was TurboTax. As part of this campaign, we had a blurb about income-driven repayment options in a newsletter they sent out to their customers. It drove more than 50,000 visits to our site!”

Targeted outreach strategies such as the FSA’s campaign and regulatory actions such as the President’s recent executive actions—June 2014 Presidential Memorandum: Helping Struggling Federal Student Loan Borrowers Manage Their Debt and the March 2015 Presidential Memorandum: Student Aid Bill of Rights have helped increase the numbers of borrowers choosing income-driven repayment (IDR) plans. According to data from FSA’s Student Loan Portfolio, nearly 3.5 million Direct Loan borrowers were enrolled in an IDR plan as of March 31, 2015. Enrollment is up nearly 60% over the 2.2 million that were enrolled in an IDR plan in March 2014.

As shown by FSA, to reach your audience successfully, you must create content and make decisions that are aligned directly with the needs and wants of your audience.