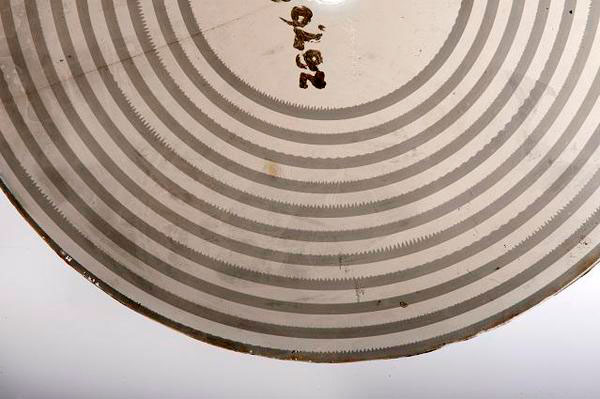 DC was the Silicon Valley of the 1880’s. And Alexander Graham Bell? He was more than just a telephone man. His Volta Laboratory was the premier 19th century innovation center.

The work of Bell and his contemporaries is the focus of a new exhibition at Smithsonian’s National Museum of American History (NMAH), “Hear My Voice: Alexander Graham Bell and the Origins of Recorded Sound.” Included in the exhibit are never-before-seen lab documents as well as early recording discs.

To drum up interest in the event, NMAH held a Tweetup on January 26th for 25 active Tweeters and history buffs. Participants used the hashtag #HearHistory to share insights on the exhibit and behind-the-scenes information from Smithsonian staff and sound scientists.

NMAH Tweetups allow people who regularly interact with the museum on social media to get a unique, in-person experience. It also provides a way for NMAH to open their museum to a larger audience.

“As a national museum, we want to share our exhibitions and collections with the whole country,” said Erin Blasco, Education Specialist in the New Media Department at NMAH. “Most people only visit DC once or twice in their lives. Even locals who can visit more frequently are often too busy and tend to miss new exhibitions, so we think of alternate formats in which to share our content. Tweetups allow us to share a bite-sized mini-tour of the exhibit with interested audiences, no matter where they live, and they can choose to follow the tour for 20 minutes or just catch one or two tweets.” 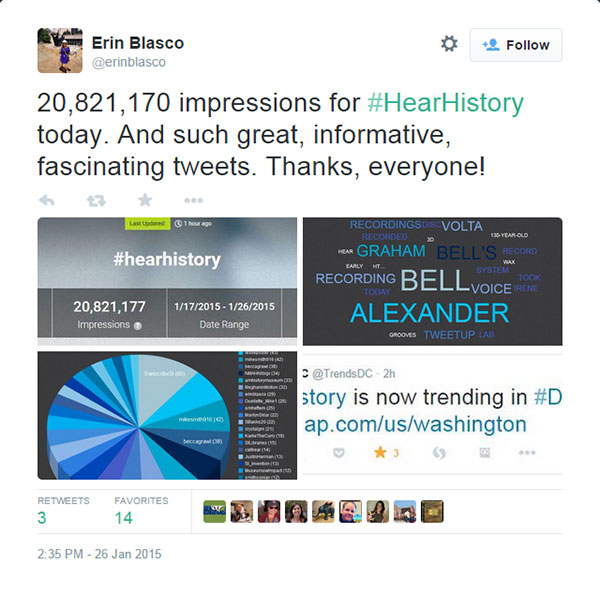 Incorporating in-person meetups with social media can lead to significant buzz around agency events. Despite inclement weather, #HearHistory was the 2nd most trended topic in DC on January 26th (coming in behind the much-discussed #blizzardof2015). During the tweetup, over 1,000 tweets were sent.

Blasco also measured impressions from January 14th until January 27th, the day after the event: the #HearHistory hashtag yielded over 20 million impressions in that time period.

NMAH also posted a recap of the event on Storify. 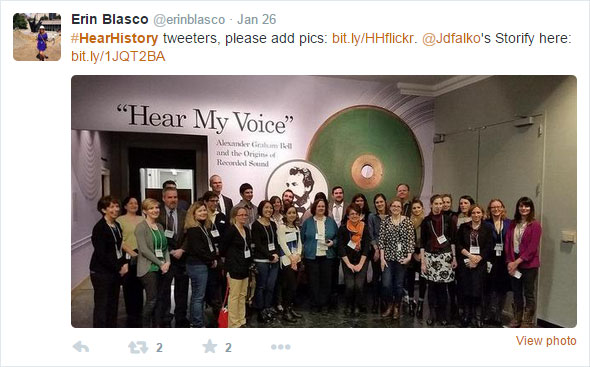 Tweetup participants got in-depth information from the curator of the exhibition, Carlene Stephens. They also heard from the physicists who created a technique for recovering sound recordings via digital imagery: Carl Haber and Earl Cornell from the Lawrence Berkeley National Laboratory, and Peter Alyea, Digital Conversion Specialist for the Library of Congress. The sound recordings were considered unplayable and mysterious until the scientists recovered them in 2011.

Finding the best format for interactive events is an important factor for success. Blasco meets with exhibition teams a few months before an exhibition opens, to discuss their educational and promotional goals.

“Tweetups are not the best option for each exhibition: some new shows are more compatible with other formats, such as an Insta-meet (Instagram meet-up), a Reddit AMA with the curator, a YouTube video series, or just a couple of really interesting blog posts,” said Blasco. “Scrolling through Twitter is a bit like hitting a buffet or flipping through a magazine–you sample a little of this, a little of that, but you may not get the overall picture of what’s going on. Because tweets are so bite-sized and tweeters might encounter the 35th tweet from a Tweetup before seeing the first tweet that establishes what is going on, only certain stories feel extra Twitter compatible.”

For Hear My Voice, NMAH had the unique opportunity of having three experts and the curator available on opening day. Blasco said they would have considered a multi-location Reddit AMA or a series of blog posts if the Tweetup had not worked out. 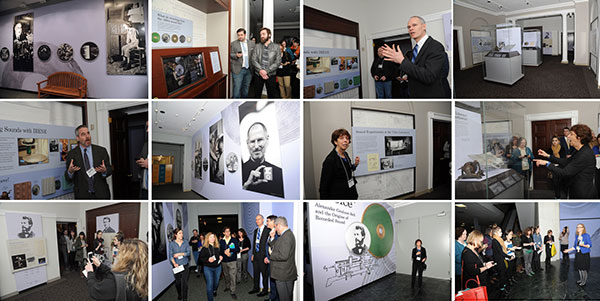 Blasco’s outreach went beyond the event itself. She sent a follow-up email to participants, requesting three things. Each extra request added a layer of engagement to the experience.

First, she asked that participants add photos to Flickr. So far, 122 photos have been added.

Second, Blasco asked participants to tweet a short survey to their followers. The survey was designed to gather data on how Tweetups reach off-site participants. She provided a template for the tweet:

“Did you see my #HearHistory tweets at @amhistorymuseum this AM? Please take this short survey: http://bit.ly/1xZT3xe.”

Finally, Tweetup participants were asked to complete an online survey about their Tweetup experience. Of the 6 survey respondents, 100% strongly agreed that they learned something new during the Tweetup. All respondents also said that they left the Tweetup with a positive opinion of NMAH, and all reported a deeper appreciation or understanding of the importance of early sound

Blasco had several tips to share with other agencies that are considering a Tweetup.